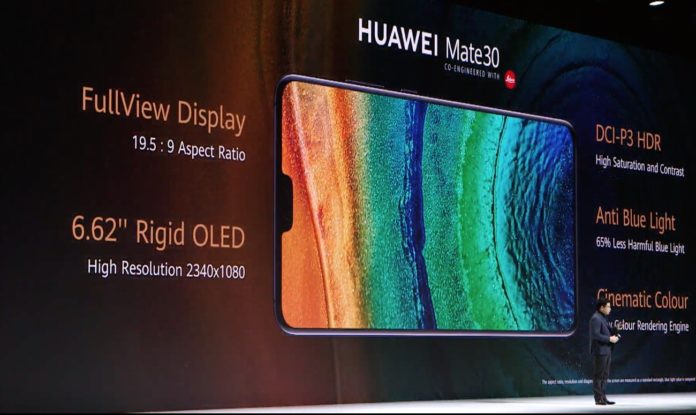 There was a lot of expectation to meet the new Huawei Mate 30 and we already have it here. The Chinese manufacturer officially presents its new flagship, along with its older brother, the Huawei Mate 30 Pro. We are facing an Android smartphone with some of the most advanced features of the mobile market that we can find today; From its screen, the generous battery with fast charge and especially its excellent photographic combination. But this year the Mate 30 arrives wrapped in controversy.

We are facing the first device that arrives after the US veto to Huawei and this has ended up implying that, as Huawei itself has confirmed, the new Huawei Mate 30 does not have Google applications preinstalled. And in fact, the new Mate 30 arrive with a renewed EMUI 10 and the new Huawei Mobile Services, but on the “open source” version of Android. We will know everything it offers us.

Small ‘Notch’ and screen without curve on the sides

Unlike the Pro model, the standard Mate 30 arrives with a flat screen. In this case, an OLED panel with a diagonal of 6.62 inches and a FullHD + resolution of 2,340 x 1,080 pixels is chosen . We are facing a larger panel than the Pro model, a situation that had already occurred other years.

While the Pro has no edges thanks to its curved screen, those of the Mate 30 are 2.8 millimeters on the side and 4mm on the upper and lower edges. Some sides built in metal to improve resistance, as Huawei has explained and compatible with gestures from both sides.

In this case we have a smaller ‘notch’, where you choose to host the front camera and facial recognition. We also have an integrated ultrasonic fingerprint reader to offer a cleaner back design.

As expected, the Mate 30 releases its new processor for the high-end. The Kirin 990 is built in 7 nanometers and was unveiled a few weeks ago. We are facing an eight-core chipset that uses the Da Vinci architecture for its NPUs. Because again, one of the key points is in artificial intelligence. The Mate 30 arrives with a main dual NPU and small neural processing cores.

Next to this chipset we have a Mali-G76 GPU with 16 cores and next to it we have a RAM of at least 6GB, a combination worthy of the high range and that should offer us a good performance.

For storage we have a 128GB version that will be expandable using NM Cards, owners of Huawei. As for the battery, the Mate 30 stands out again as one of the terminals that incorporates the most battery in its size. We have in particular 4,200 mAh, compatible with fast charging of up to 40W and a wireless charging of 27 watts.

EMUI 10 with Huawei Assistant and AOSP

But without a doubt, one of the key changes of this Huawei Mate 30 is found in the software. As Huawei itself has confirmed, the operating system with which it arrives is not exactly Android 10, but EMUI 10 on AOSP, the open source version of Android.

This is of radical importance, since for the first time Huawei phones bet everything on their own services and applications and does not come with Google services, or Maps, Gmail or the Google Play application store.

Instead, EMUI 10 has been renewed incorporating a dark mode to take advantage of the OLED screen, button customization, the new Huawei Assistant to replace Google Assistant and HiCar, to be compatible with the infotainment services of cars.

Triple rear camera with a design inspired by DSLR cameras

One of the highlights of the Huawei Mate 30 is its rear camera, in this case it is composed of three sensors and located in a circular module with the flash on the left.

For the main sensor we have a 40 megapixel sensor with an aperture f / 1.8. For high school, we choose a wide angle with an f / 2.4 aperture and finally we have an 8 megapixel telephoto lens with OIS that offers 3x optical zoom, 5x hybrid and digital up to 30x.

As on other occasions, we also have laser focus. On this occasion, located in the lower left circle.

The front camera, meanwhile, has a 24 megapixel f / 2.0 sensor and an advanced facial recognition system. Among the additions of the camera we find of course the improvement by artificial intelligence, which in this Mate 30 translates into an improved night mode, macro photography up to 2.5 centimeters and stabilization for the video.

Versions and price of the Huawei Mate 30

In the absence of confirming the price and availability data, for the moment we know that it will arrive in four different colors and two special versions of vegan leather in Forest Green (green) and Orange (orange) colors. The colors available are Space Silver (silver), Cosmic Purple (purple), Black (black) and Emerald Green (green).

We will update this information as soon as the brand officially communicates it.

New leaks and images of Google next flagship Google Pixel 4...