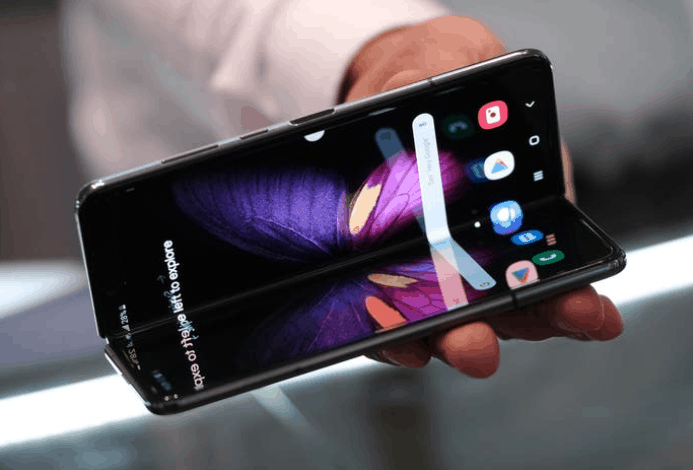 Now it is there, the first foldable Samsung phone that the Korean company has already announced several times. The Galaxy Fold can be opened thanks to new technology to a continuous screen in tablet size. Technical problems with the folding mechanism have delayed the market introduction.

Samsung has improved and announced in the context of the IFA now, the Galaxy Fold 5G to bring this month in the market. The folding phone will be available in black and silver from 18 September.

According to the manufacturer, the main display consists of a multilayer, flexible polymer material. Inside the center of the screen sits a movable hinge, for which Samsung’s own statements were inspired by “precise watchmaking”. This allows the Galaxy Fold to be opened and closed “intuitively like a book”. The tech giant from South Korea calls the new screen technology “Infinity Flex-Display“.

The first devices that Samsung had sent to US media for preliminary tests in the spring did not last long in practice. Various testers reported that their patterns already showed damage to the display after a few days, such as bulging in the middle. Sometimes parts or the entire surface of the screen fell out.

Smartphone and tablet in one

The new Samsung model, the first foldable Galaxy phone, has a very large screen: unfolded unfolds the main screen of the Galaxy Fold with 7.3 inches (18.5 centimeters) to the size of a tablet.

A specially developed interface and apps adapted to the new form factor will open up new application possibilities. For example, users can use up to three compatible apps in parallel “Multi Active Window” – for example while editing videos, browsing the photo gallery and answering messages. For smooth multitasking 12 GB of RAM is installed and 512 GB of internal memory provides space for videos, photos or apps.

If the cell phone is closed, users have access to the most important information and functions via the front display. For example, you can quickly record a video that can be seamlessly transferred to the main display. Even opened apps can be passed on from the outside directly to the inside. Samsung calls this function “App Continuity“.

5G support on board

A total of six cameras provide for photos and video recordings. The unfolded display can also be used as a viewfinder. Two front cameras, including inside a dual-camera with depth sensor, solve for selfies with ten megapixels (MP). The main camera comes with 16 MP ultra-wide-angle, 12-MP wide-angle and a 12-MP telephoto lens. Videos are recorded in 4K (UHD), HDR10 + is available through the main camera.

The improved folding cell phone now also has 5G mobile chips on board, allowing users to benefit from the blessings of the latest mobile technology.