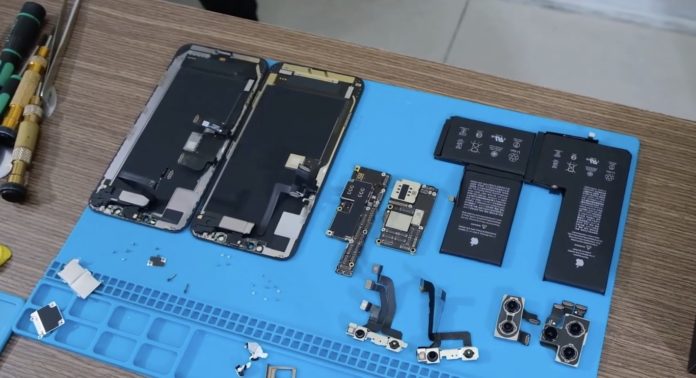 The iPhone 11 ( models for reviews ) begin to arrive and more details of them begin to appear that Apple did not reveal in the presentation. One thing that was still to be confirmed and we only had assumptions so far was the battery. Apple only indicated the increase in autonomy “up to 5 hours” but what he did not explain is that the iPhone 11 Pro Max brings a battery 25% larger than that of the iPhone XS Max. This is confirmed by the first disassembly of the mobile.

Where Android phone manufacturers love to show off specs and figures, Apple has traditionally been more reserved with respect to the technical aspects of its iPhones. The Cupertino giant prefers to talk about battery life or how much faster its processor is compared to the previous generation. For this reason, it is often up to external repair technicians to find out details about the devices.

The YouTube channel DChannel has revealed what the iPhone 11 Pro Max hides inside. Of all the disassembly, perhaps the most interesting part is the battery. The 11 Pro Max has a 15-watt-hour battery, almost 25 percent larger than the 12-watt-hour cells of the iPhone XS Max.

GitHub announces the acquisition of Semmle, a tool for analyzing the code

This collides with what Apple told in the keynote. Although they did not indicate the reason why the autonomy increased “up to 5 hours” in the new iPhone, it was implied that it was all about software optimization. The reality is quite different, a 25% larger battery makes it possible to reach those extra 5 hours of autonomy much easier.

The first reviews of the iPhone 11 Pro Max seem to confirm this increase in autonomy. It is difficult to replicate exactly the tests of Apple to get those extra 5 hours, but most of the analyzes in which the autonomy is excellent this year coincide. Surely it also has to do, in part, the new A13 Bionic processor, more efficient than the previous generation. Apple in fact claims that it is the chip with the highest energy efficiency ever manufactured.

How has Apple managed to get 25% more battery volume ? There are several tricks inside the iPhone 11 Pro Max. Apparently the L-shaped battery is now composed of a single cell and not two cells as it happened in last year’s models. This allows Apple to save a little more space than take advantage of it with more battery. On the other hand, the logic board of the iPhone is smaller this year than the previous year, which once again leaves more space for the battery.

Do not forget the size and weight factors. Apple has been criticized for years for subtracting fractions of millimeters from the iPhone instead of leaving them there and inserting more battery. Well, this year the complaint comes because the iPhone is thicker than the previous year and weighs more than ever. Precisely this has caused more battery and consequently autonomy.

WhatsApp announces end of support for Windows Phone, iOS 7 and...

A new patent shows a smartphone with holograms: a new future...

The iPhone 12 points to major changes, and 5G support is...