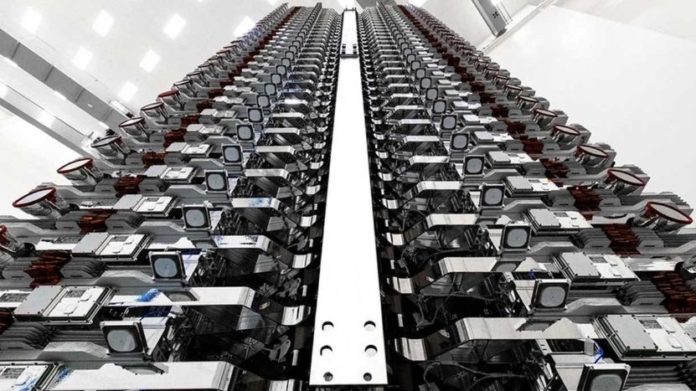 This week SpaceX had a new launch that put into orbit 60 new satellites of its ambitious Starlink network, with which they seek to offer satellite internet of up to one gigabit worldwide. This was the third launch and with it SpaceX already has 182 satellites in orbit (including two prototypes), thus becoming the largest commercial satellite network in the world, this after exceeding 150 remote sensing satellites currently operated by Planet.

These 60-satellite lot is currently at an altitude of 290 kilometers, and in the coming days, they will be adjusted to reach 547 kilometers to align and synchronize with the other 120 satellites.

It should be noted that of the 182 satellites, two are prototypes that will be disconnected and sent back to Earth to disintegrate; three have disconnected from the network and it has not been possible to re-establish communication with them, which will also disintegrate in the Earth’s atmosphere; and one more that is almost hit with an ESA weather satellite, which is currently also disconnected. That is, today SpaceX has 176 Starlink operating satellites.

For the first time ever, ESA has performed a 'collision avoidance manoeuvre' to protect one of its satellites from colliding with a 'mega constellation'#SpaceTraffic pic.twitter.com/kmXvAgpj1U

Given the controversy that warns that such a quantity of satellites will disturb astronomical observations of the night sky, Elon Musk confirmed that this last batch of satellites has a dark layer that will prevent them from shining and thus can affect astronomical studies.

On the other hand, Musk also confirmed that before the end of the month they have scheduled between one and two more launches, each with a batch of 60 new satellites since the goal is to orbit 60 satellites every two weeks. And the goal is to start the first tests with clients in Canada and the northern United States between March and April of this 2020.

Remember that SpaceX was first authorized to deploy 4,425 satellites, and then expanded to send 7,518 more satellites. That is, they currently have permission to operate 11,943 satellites in the low Earth orbit. Last October, the company requested a new spectrum expansion authorization that includes 30,000 new satellites, which means that we are talking about the fact that Elon Musk’s company seeks to launch almost 42,000 satellites to offer broadband internet to everyone. This last request has not yet been approved.

How will we connect to Starlink from Earth?

Right now the eyes are on the satellite launches, but because Elon Musk seeks to start with the public connection tests in a couple of months, the question begins to arise and how will users connect to this new satellite network?

Given this, Elon Musk has advanced a few details of what will be the hardware that the first users will need to connect to Starlink. They will be called ‘Starlink Terminals V1’ and, in Musk’s words, they look like “a thin, flat and round UFO on a stick”

Looks like a thin, flat, round UFO on a stick. Starlink Terminal has motors to self-adjust optimal angle to view sky. Instructions are simply:
– Plug in socket
– Point at sky
These instructions work in either order. No training required.

The interesting thing about this is that Musk says that the installation will be extremely simple since you only need to connect the Terminal to a plug and go, since “Starlink Terminal has motors to auto-adjust the optimum angle to point to the sky”. “No training is required,” Musk said.

That is, the user will not have to find out where the satellites are and point towards them, he says that the Terminal will do it automatically and will be adjusted in real-time according to the movement of the network so as to always have a connection.

Unlike geostationary satellites that provide satellite television, satellites within Earth’s orbit connect from a specific point on Earth for a few minutes.

And here is the real challenge of SpaceX and Elon Musk, since satellite television antennas always need to point in the same direction. While the terrestrial antenna proposed by Musk, known as Terminal, will need to constantly change the place to which it is pointing, as well as to track the satellites in constant motion, in addition to doing so with incredible reliability and precision.

No doubt the idea is really attractive and complex, so we will have to wait to have more information on how this will be possible, as well as the price that each Terminal will have and the type of rates that SpaceX will offer.

They “were surprised to find evidence of two or three companion stars that probably...
Scientific Research

Researchers at the Department of Energy's SLAC National Accelerator Laboratory and Stanford University have...

They “were surprised to find evidence of two or three companion stars that probably...
Revyuh