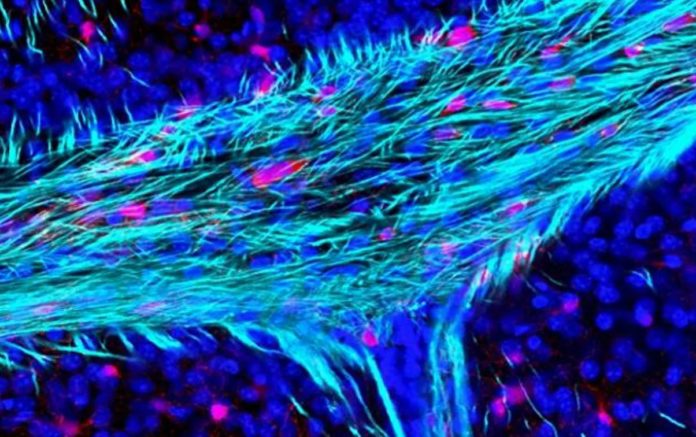 Scientists have found that the main cause of brain aging and the development of neurodegenerative diseases is the loss of myelin, a substance that forms the sheath of nerve fibers.

The study authors also identified a gene responsible for the production of myelin, which, in their opinion, will allow in the future to create a drug for brain rejuvenation.

The results are published in the journal Aging Cell.

Myelin acts as a protective and electrically insulating sheath around the brain’s “wires” – nerve fibers called axons that provide communication between brain cells. Disruption of the myelin sheath negatively affects the efficiency and speed of neuronal processes, which leads to a decrease in cognitive functions and the development of certain neurodegenerative diseases such as multiple sclerosis and Alzheimer’s disease.

Neuroscientists from the UK, Germany, and Italy have found that the cells that control myelin repair become less efficient with age, and have identified a key gene whose declining expression with age reduces the ability of cells to replace lost myelin.

“Everyone is familiar with the gray matter of the brain, but very few people know about the white matter, which is made up of insulated ‘electrical wires’ that connect different parts of our brain,” said research leader Professor Arthur Butt in a press release from the University of Portsmouth. Schools of Pharmacy and Biomedical Sciences – A key feature of the aging brain is the progressive loss of white matter and myelin, resulting in devastating effects on brain function and cognitive decline.

Brain cells that produce myelin, called oligodendrocytes, must be replaced throughout life by stem cells.

However, this process slows down with age. The reason for this was still unknown.

Comparing the genomes of young and old mice, the authors determined which processes are disrupted with age. This allowed them to figure out the reasons why the replenishment of oligodendrocytes and the myelin produced by them decreases in the aging brain.

“We have identified the GPR17 gene associated with these specific precursors as the most vulnerable in brain aging, and that loss of GPR17 is associated with a reduced ability of these precursors to actively work to replace lost myelin,” says first author Dr. Andrea Rivera from the Institute of Human Anatomy of the University of Padua.

The authors note that their research is only the beginning of a large work on finding ways to “rejuvenate” cells – precursors of oligodendrocytes for effective replenishment of the lost white matter.

“We have only touched the tip of the iceberg and we will strive to apply our findings to future research,” said another contributor, Dr. Kasum Azim of the University of Düsseldorf.

“This is a promising approach to combat demyelination in the aging brain and caused by this process diseases including multiple sclerosis, Alzheimer’s disease, and neuropsychiatric disorders.”

Scientists hope that the use of the strategy of systems biology will allow in the future to identify therapeutic agents that rejuvenate cells – precursors of oligodendrocytes and restore myelination in age-related neuropathological disorders.