More
HomeLifestyleSocial NetworksBritish teacher stranded in China after suffering a stroke returns to the... 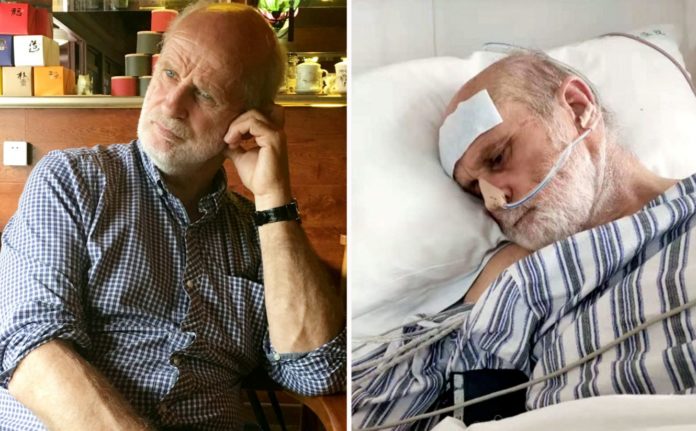 A sick British teacher who was stranded in China for months after having a stroke has flown home thanks to former pupils raising about $75,000 in six hours to fund his return.

Geology teacher Bob Allison has been paralyzed across the left side of his body after suffering from a stroke on January 4.

The popular 68-year-old’s family hoped he would be repatriated to the UK for treatment but a combination of Covid restrictions, mounting bills and the language barrier meant he was stranded.

They were told flights would cost at least $48,000 due to coronavirus restrictions, while his medical bills stood at more than $16,000.

Bob’s daughter Claire, who lives in Bristol, feared her dad’s condition would continue to decline if he couldn’t get back to Britain.

In a desperate attempt to raise money for his return, she launched a GoFundMe page on March 15.

Incredibly, just six hours after the appeal went live, the family raised around $75,000 – the majority being pledged by Bob’s former pupils.

The money was enough to pay Bob’s medical bills and fund a flight home.

Bob finally arrived in the UK on Saturday (17/4) and is now being treated at the Worcestershire Royal Hospital.

Claire, 32, who works in marketing, updated supporters by posting a message on the GoFundMe page.

“I’m delighted to report that my dad arrived safely back into the UK this morning with the assistance of a Chinese repatriation team and is now being transferred to the Stroke Unit at Worcestershire Royal Hospital.

“I spoke to him briefly en route; he coped well with the journey and seems in good spirits.

“Once again, thank you so much to everyone for your incredibly generous donations and supportive messages.

“The funds raised have been invaluable in getting him home.

“I will shortly be closing this page, but I’m sure my dad will be keen to convey his own thanks to everyone now that he is home.

“Many thanks once again, Claire and family.”

The fundraising for Bob, who taught at schools in Worcester for four decades before moving to China last year, attracted dozens of emotional tributes from former pupils.

“Such an exceptional man. My children and I (Matthew and Sarah) knew him from Chantry (School) days.

“I also worked in the school office and saw how much he cared about the children.

Bob had been receiving treatment at Yangzhou hospital but despite two months of rehabilitation, he was still unable to stand or walk independently.

Claire said her dad’s stroke had come “out of the blue” and due to coronavirus China’s travel ban meant he was not able to fly back.

“I got a call in the middle of the night to say he’d been found in the morning, but not straight away because he lived on his own.

“That has implications for stroke patients.

“Covid was the biggest hurdle to getting him back because there was no way of anyone getting a visa to China to collect him.

“We wanted to use an official repatriation company to make sure he got back as safely as possible.

“I was able to communicate with him but his understanding was relatively limited and the language barrier in the hospital didn’t help.

“He was in a very difficult situation and it was distressing for the family for him to be stuck so far away.

“We were completely overwhelmed by the level of support and donations.

“We had wanted to cover as much of the costs as we could as a family.

“Then the school community was very keen to get involved and help us.

“We knew he was well respected in the community but never imagined it would take off in the way it did.

“He was at the school for 40 years and was so well-loved by the students and their parents.

“We are really, really grateful for the donations and will give the excess to the Stroke Foundation.

“We think we will have to work closely with them to look after him here.”