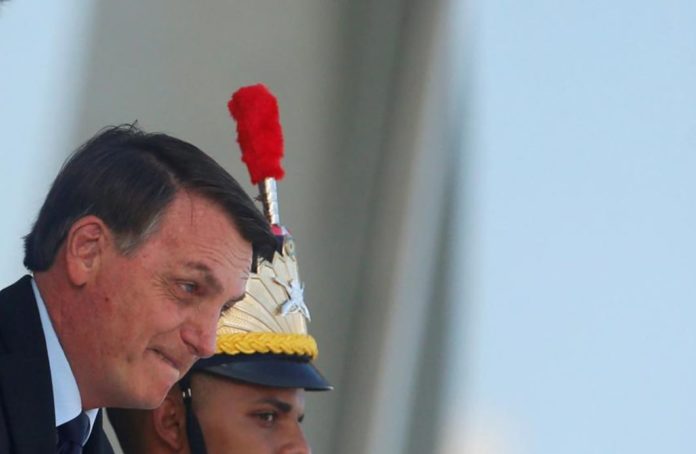 Brazil has become the worst example to follow in managing the pandemic and its president, Jair Bolsonaro, intends to cover the sun with his hand. The far-right leader has given this weekend a new twist to denying the severity of the disease, trying to hide the global numbers of deaths and infections, in addition to threatening to leave the WHO following in the footsteps of his admired counterpart American Donald Trump.

The president tries to mask the tragic dimension of Covid-19 in a country without a unitary policy of mandatory quarantine by Bolsonaro’s own decision. Alarms over the government’s obstructionist attitude jumped on Friday night, after four days in a row exceeding a thousand deaths per day, in the same week that the WHO was very concerned about the situation in Brazil and after overcoming Italy by placing itself in third place in the number of deceased, with 35,026 at press time. The trend indicates that it will soon be placed in second place, surpassing the United Kingdom, which yesterday had 5,000 more deaths than the South American giant, already second in global infections after the US, with 645,771 positives.

The daily bulletin with the update of figures that the Ministry of Health offered every afternoon happened on Friday to be released at night, after the television news programs with the highest audience, and with a remarkable novelty: the dead and infected of the day were reported, but it was not indicated of the accumulated total. The same day, Bolsonaro had threatened to leave the WHO, accusing the UN health agency of “ideological bias.”

Yesterday the page of the ministry where the total data of the coronavirus was statistically summarized appeared with the message “under maintenance”, while the last released statement had an optimistic title and nothing in keeping with the accelerated spread of the disease: “Brazil registers almost 12,000 recovered in the last 24 hours ”. In addition, the ministry, which for three weeks has been provisionally led by a military man, General Eduardo Pazuello, after the resignations of his two predecessors due to disagreements with Bolsonaro, explained that he will carry out a new count of positives and deaths, considering that the real figure it is lower – contrary to what is suspected in the rest of the world – for having added, supposedly, deaths from other pathologies.

Bolsonaro refused to respond to the change in reporting methodology when asked by journalists yesterday but later tweeted that the new criteria of the Ministry of Health will allow “more accurate” data to be offered and confirmed that no more total figures will be given. “By accumulating data, in addition to not indicating that most (of the cases) no longer have the disease, they do not reflect the time of the country.”

A day earlier, the president had questioned WHO after the organization alerted Latin American governments that it cannot de-escalate when the curve continues to grow. “USA left the WHO and we are planning to do the same, in the future: either the WHO works without ideological bias or we are also going to leave; We do not need anyone from outside to comment on our health”, said Bolsonaro.

Faced with Bolsonaro’s obstructionism, the opposition media, such as the Globo group, redoubled their commitment to denounce the denialist president. “The government is trying to make the dead invisible,” the digital edition of O Globo titled yesterday, summarizing the opinions of the highest officials in charge of Health in various federal states of the country, also confronting the populist leader for his management of the pandemic. And at the same time, Globo TV made a decision reserved only for the most urgent news: it interrupted the broadcast of its popular nightly soap opera – which is broadcast historically after the evening newscast – to offer the figures of the latest official newsletter of the coronavirus.