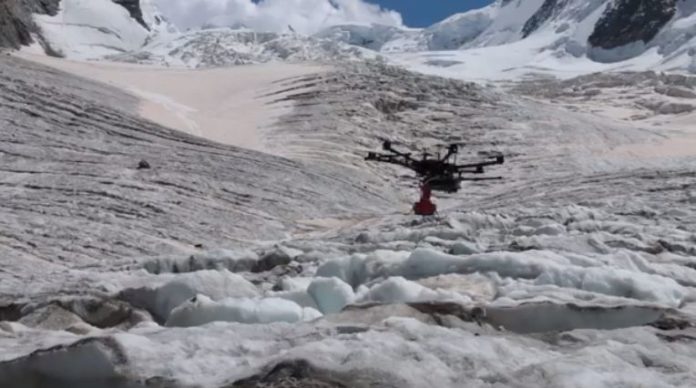 Swiss engineers have developed and tested the system of unmanned placement of GPS sensors on glaciers. This approach allows people not to go out on the glacier once again, which carries a risk due to cracks in the ice, as well as faster, cheaper and more environmentally friendly use of helicopters, which are used to deliver sensors to hard-to-reach places. A brief description of the project is available on the website of the Swiss Polar Institute, a video of the field testing system published on YouTube.

The average global temperature of the planet is now about one degree higher than the values of the mid-19th century (pre-industrial period) and the rate of melting of glaciers recently is growing, as evidenced by a lot of research, including, for example, such disappointing predictions: by 2100, two-thirds of the Himalayan glaciers could melt, and by 2050 – half alpine

All these forecasts, however, are to some extent approximate and rely on models, which, in turn, rely on data collected by glaciologists in the field. In the general case, the mass of mountain glaciers is affected by two main parameters: the rate of growth/loss of mass of the glacier and its speed. To measure the speed of movement, glaciologists have to manually place GPS sensors on them, which move together with the glacial masses and allow you to accurately record the distance that the glacier travelled during this time. As a rule, such sensors are brought just on foot, which is quite dangerous due to deep cracks, and they are delivered to remote places by helicopter, which is expensive and long.

As an alternative, engineers from the Swiss Polar Institute proposed using a system of two drones to successfully deliver sensors. The first multi-copter maps the area, after which the system chooses the appropriate location to place the sensor. Then an autonomous multicopter flies there, which delivers the sensor in a 3D-printed case to the desired point and drops it from a height of 10-20 centimeters onto the ice. Each drone is equipped with radar and lidar, as well as a time-flying camera – all of these sensors are needed by the drone to clearly estimate the distance to the surface and map Area.

In the summer of 2019, engineers tested the system on the Horner Glacier in Switzerland and made sure that the system was successful in terms of sensor delivery. Hexacopter autonomously delivered a kilogram sensor to the desired point 800 meters from the take-off point. The reset mechanism worked normally, and the springy legs of the 3D-printed housing softened the sensor’s impact on the ice. After that, the drone independently returned to launch. It’s cheaper, faster and more environmentally friendly than using a helicopter, and safer than sending people to place sensors on the surface of the glacier, the developers say.

At this stage, engineers are working on a similar sensor return scheme – it is also planned to use a drone here, but from the outside, it will hang a network by which the drone should hook the sensor to one of the hooks on the case. So far, the experiments are carried out in ideal conditions on a flat platform, however, in the near future, the developers plan to move on to field tests.