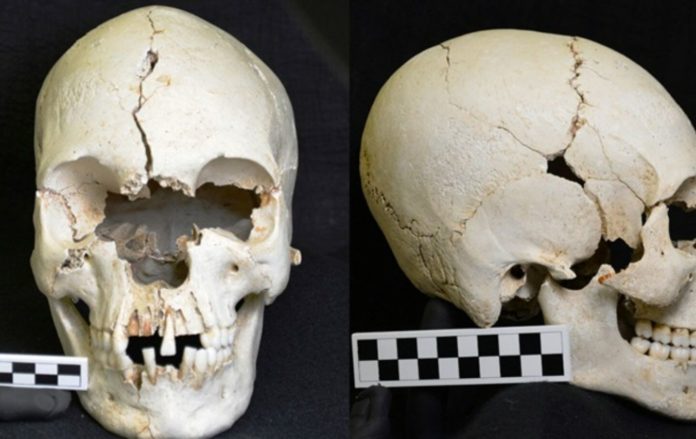 The skull was discovered on Petite Mustique, a rough uninhabited island that, records indicate, could have been the site of a leprosarium in the early nineteenth century when patients with leprosy could be quarantined to stop disease spread.

The study led by UO archaeologist Scott Fitzpatrick including lead author and skeletal biologist Greg Nelson and Taylor Dodrill was published in the International Journal of Paleopathology.

“There are a number of pretty well-known cases in the Caribbean and Pacific where smaller islands were used as places to segregate people with leprosy, such as Molokai in Hawaii,” says Fitzpatrick.

However, while leprosy has been documented in the Caribbean through written evidence dating all the way back to the mid-17th century, those reports have been insufficient. Archaeologists have discovered scant skeletal remains of the disease, which could help in tracing its spread pattern.

Leprosy involves serious deformation of the hands, feet, and face, and these changes are visible in the bones. Using the skeletal distortion of the nose and upper jaw of the skull, Nelson was able to conclude that the person had leprosy.

The disease spreads through continuous close contact with a sick person, but “the fact that leprosy can also lead to noticeable disfigurement of the hands, feet and particularly the face made it a very scary disease and likely precipitated moves to isolate people with leprosy,” Nelson adds.

According to the World Health Organization, leprosy is now officially classified as a neglected disease. It can still be found in portions of Brazil, South Asia (India, Nepal), East Africa (Tanzania, Madagascar, and Mozambique), and the western Pacific Ocean.

In the 1940s, the drug Dapsone was discovered to treat leprosy. Today, if diagnosed early, leprosy can be cured without harmful consequences. But 200 years ago, the patient was dying alone.

You were reading: 200-year-old ‘Skull of a Leprosy Patient’ discovered on Caribbean island

As part of this research, the team examined both the lobe and non-lobe regions...
Featured

Humans, as a species, are always reading social signals to figure out what's going...
Health & Fitness

Dementia affects an estimated 55 million individuals globally, a figure that is likely to...

As part of this research, the team examined both the lobe and non-lobe regions...
Featured

Humans, as a species, are always reading social signals to figure out what's going...
Revyuh