Astronomers find one of the largest structures in the universe | Video 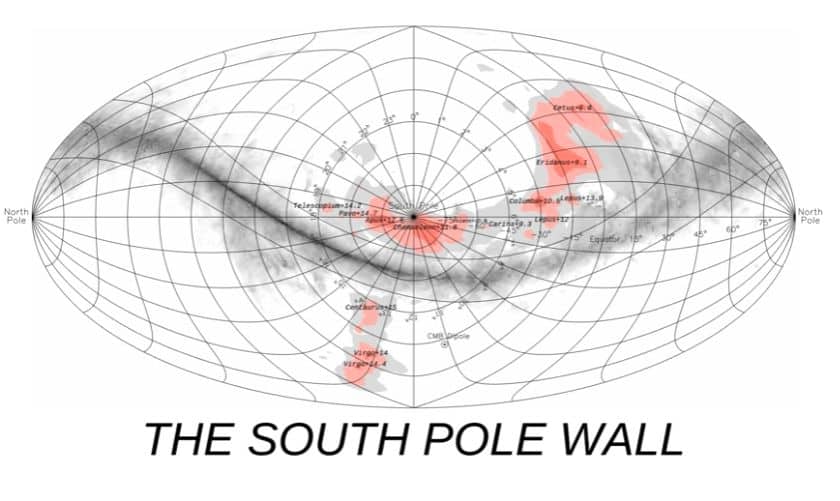 Astronomers discover the South Pole Wall, a gigantic cosmic structure that spans about 1.4 billion light-years and contains hundreds of thousands of galaxies.

The structure has remained undetected until now because large parts of it are half a trillion light-years away behind the brilliant Milky Way.

Astronomers have long noted that galaxies are not randomly scattered throughout the universe but are grouped together in what is known as the cosmic lattice, that is, huge strings of hydrogen in which galaxies are strung like pearls on a necklace explains the Live Science portal.

The scientists who study these clusters and make their maps are called cosmographers. So far, the largest cosmic structure is the Great Wall Hercules-Corona Borealis, which spans over 10 billion light-years, or more than a tenth the size of the visible universe. Our Milky Way is located in the Laniakea supercluster that is 520 million light-years across.

The international team of researchers observed the southern part of the sky where the bright light of the Milky Way blocks much of what is behind and around it.

The team managed to plot the three-dimensional distribution of matter in and around this area using two measurement techniques. The first was redshift, which determines the distance to objects. In addition, they took into account the movement of galaxies with each other while pulling each other gravitationally, explained Daniel Pomarede, cosmographer at the University of Paris-Saclay and one of the study’s authors. The method allowed astronomers to detect the hidden mass that gravitationally influences the motion of galaxies, and thus discover a dark matter that doesn’t emit light but exerts a gravitational pull on anything that is close enough.

As a result, the scientists had a map that showed a bubble of matter more or less centred at the southernmost point of the sky, with a large wing extending north on one side in the direction of the Cetus constellation and another arm thick towards the constellation Apus.

Still, the study authors acknowledged that they may not yet have mapped the entirety of the vast South Pole Wall.

“We will not be sure of its full extent, or whether it is unusual until we map the universe on a significantly larger scale,” they wrote in an article published in The Astrophysical Journal.