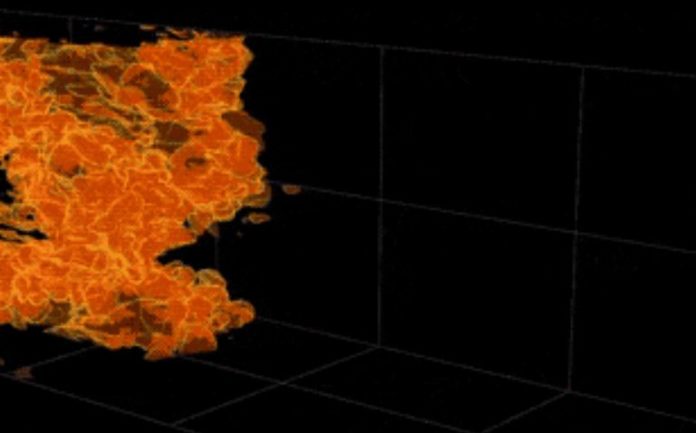 Scientists have built a theory of the transition from combustion to detonation during the explosion, and also conducted experiments confirming the idea. A key role in the new concept is played by turbulence, which is involved in the initiation of combustion in a supersonic shock wave. The results are applicable to a wide range of processes, both on Earth and in space, and can even clarify the details of supernova explosions.

From a physics point of view, the processes called explosions can vary considerably in detail. One of the key differences is related to the speed of propagation of the reaction front through the system. If this boundary of the phase transition moves slower than the speed of sound in the medium, then combustion occurs in the deflagration mode. For example, This mechanism is responsible for the rapid combustion of a mixture of gasoline vapors with air or fireworks.

A fundamentally different regime is detonation, in which the transformation front moves with supersonic speed. In contrast to deflagration, in which energy transfer is mainly due to transfer processes, i.e. convection, diffusion, and advection, detonation is supported by energy release due to the compression of the substance by the blast wave itself, since its passage creates suitable conditions and initiates a reaction.

Supernova explosions are the most studied astronomical explosions. Most astrophysicists believe that they occur when the substance is accretive to a white dwarf or when two white dwarfs merge. In any scenario, the mass of the object should exceed the Chandrasekhar limit, which triggers the fast thermonuclear combustion of carbon and oxygen in the core of the stellar remnant. However, the details of this process are still unclear.

Difficulties in the numerical modeling of such phenomena are associated with a wide range of parameters, such as distances and temperatures, as well as the lack of rigid boundaries that usually facilitate the reconstruction of processes on a computer. In the vast majority of models describing supernova, the appearance of a supersonic detonation wave is assumed. However, the formation of this disturbance itself cannot be reproduced from the first principles, therefore, detonation is postulated, and the place and time of its occurrence actually turn out to be free parameters.

American physicists, led by Alexei Poludnenko of Texas A&M University, have proposed a new theory that describes the transition from deflagration to detonation. The analysis carried out by the authors shows that supernova explosions are similar to explosions well known on the Earth, but instead of the chemical energy of bonds in molecules, the process supports the thermonuclear energy of nuclear fusion.

As a result, the researchers formulated an analytical theory of detonation caused by turbulence, which is valid for both, the depths of white dwarfs and for terrestrial explosive systems. On its basis, scientists created a computer model that numerically solved the resulting equations.

Then physicists conducted laboratory experiments, the data of which were consistent with the theory. In the experiments, they observed a reaction in a gas mixture of hydrogen with air in a pipe 1.5 meters long open on one side, and also recorded the pressure and velocity of propagation of the front. As a result, it was possible to show that the initial combustion caused turbulence, which, in turn, accelerated the course of the reaction. When the wave velocity began to exceed the Chapman – Jouguet velocity, which is defined as the speed of sound in the region of reaction products, multiplied by the contrast density before and after the wavefront, the combustion became unstable and turned into detonation.

Scaling the results on the parameters white dwarfs, the authors come to the conclusion that under normal subsurface for about 10 residues stellar matter density 7- 10 8 gram per cubic centimetre spontaneous transition from deflagration to detonation is practically inevitable.