More
HomeScience and ResearchScientific ResearchRipples of an ancient star helped limit the change in the gravitational... 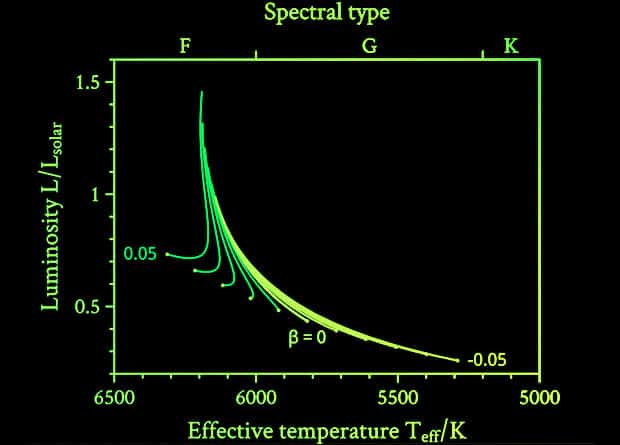 Astronomers managed to impose restrictions on the change in the gravitational constant over billions of years of the existence of the universe. To do this, they evaluated the effect of this change on the evolution and vibrational properties of one of the oldest known stars in the Universe – KIC 7970740, whose age is approximately 11 billion years. It was not possible to identify a significant change, scientists write.

It is generally believed that the so-called fundamental physical constants are the same at all points in space and at any given time. However, scientists are building theories in which a gradual change in these quantities is allowed. Sometimes this change is very small, which does not allow us to fix it directly, and in other models, these changes are responsible for some observed effects, which are usually interpreted differently.

Such fundamental constants can include the speed of light in vacuum, the elementary charge, the mass of the electron and proton, the Planck constant, and the gravitational constant. It is difficult to directly measure some quantities with high accuracy, therefore, the drift of their combinations is sought, for example, a fine structure constant that connects the electron charge, the electric constant, the speed of light and the Planck constant. Relations between spectral lines, which can be measured with high accuracy, depending on this value.

The modern theory of gravity – the general theory of relativity by Albert Einstein – is based on the principle of equivalence, which indicates the independence of the outcome of a local experiment in a freely falling reference frame from a position in space-time. In other words, in the framework of GR, the gravitational constant G is assumed to be unchanged by definition. At the same time, from the point of view of more complex concepts, such as string theory and some types of modified gravitations, this quantity is not a fundamental constant and can change over time.

Drift G is experimentally sought in several ways. The most accurate method at the moment is the laser location of the moon, which allows you to very accurately calculate the distance to the nearest cosmic body thanks to the reflectors placed there. The current restriction on the variation of this constant, defined as the ratio of its time derivative to the value Ġ / G itself, is (7.1 ± 7.6) × 10 −14 year −1. Within the error limits, this value does not differ from zero, therefore, it is said that there is no significant trend.

Danish astrophysicists led by Earl Patrick Bellinger of Aarhus University have presented a new estimate of the temporal drift G based on observation and modeling of the ancient low-metallic star KIC 7970740. The authors’ idea is to simulate the pulsations of the star based on data obtained from three-year observations using the Kepler Space Telescope. The properties of such oscillations are associated with the parameters of the star and allow us to calculate its global characteristics. If we also assume that the existing theory of stellar evolution is sufficiently accurate, then we can establish restrictions on the age and history of the star by comparing model results and observations.

The authors obtained an estimate of Ġ / G = (2.1 ± 2.9) × 10 −12 year −1, which is also compatible with the absence of change. This estimate is somewhat worse than the most accurate ones already existing, but differs from them in an important aspect: it limits the change in the constant over billions of years, while the laser location of the moon is carried out only for several decades.

The gravitational constant affects several parameters of the star. In particular, the total luminosity is proportional to G to the 7th degree, therefore, a constant change in time directly affects the rate of evolution of the star. Also, changes in gravity will cause displacements of the frequencies of stellar pulsations and their properties.

Astronomers write that this method can be developed by applying it to ensembles of stars for which accurate observational data are available. This will make it possible to establish even stronger restrictions on the drift of G. Also, in a similar way, you can try to find a change in other fundamental constants that affect the properties of the stars.

The most accurate value of the gravitational constant was obtained by physicists last year, and the fine structure constant and the mass ratio of the proton and electron, according to experimental data, have not changed over the past three billion years. There were attempts to explain the possible stability of beryllium-8 in the early Universe with the help of constant drift, but they were unsuccessful.