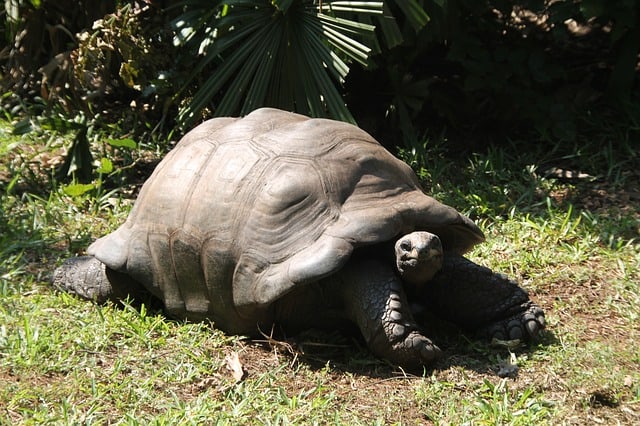 Scientists conducted a classic behavioural experiment with giant land turtles and found that they had previously underestimated their cognitive abilities. Seychelles and Galápagos turtles have learned to recognize a stimulus and choose between several stimuli. In addition, they showed sociality and in the group studied better than alone, and they preserved the memory of the experiment for months and even years.

The cognitive abilities of giant land turtles, unlike sea turtles, have not been studied much. For a long time, it was believed that the slowness of the movement of these animals is complemented by inflexible behaviour. However, turtles often travel rather long distances throughout the day, including across different landscapes, so some researchers have suggested that their mental abilities may be underestimated.

In addition, giant turtles settle quite densely. Despite the fact that they are not considered social, they have long described the mechanism of communication using the nose (nosing): one individual approaches the other and sticks its nose in the head or neck for a while. What function this communication performs is not yet clear, but the very fact of its existence suggests that turtles are more sociable than they appear.

A team of researchers led by Michael J. Kuba from Okinawa Institute of Science and Technology experimented with two types of land turtles: the Galápagos and Seychelles giant in the zoos of Vienna and Zurich (a total of 8 and 9 individuals, respectively).

At first, the animals were trained to respond to the stimulus – a toy for dogs attached to a stick. The experimenters touched the turtles with a toy on the nose and immediately gave them food. After some time, the animals began to bite the toy themselves. Seychelles turtles took about 50 sessions, and the Galápagos turtles, on average, 17.5.

After that, the toy began to be shown at a distance of 1.5-2 meters, so that the animals crawled in its direction. Here, too, Seychelles turtles were smarter than the Galápagos: about 40 sessions against 58.

In the Vienna Zoo, the training sessions were strictly individual, and in Zurich – group: each animal was worked separately, but they were all in a common enclosure and could interact with each other. It turned out that in the group the animals learn much faster: Seychelles turtles needed an average of only 10.5, and Galápagos – 16.5 sessions. At the same time, the researchers did not notice any conflicts and aggression in their behaviour.

During the third stage of training, turtles were taught to choose one of two toys that differed only in color. But here, group training turned out to be practically useless: for example, Galápagos turtles learned to crawl to the right toy in 24.5 sessions alone and in 20.5 sessions in a group. However, this result is quite expected, since each turtle was “guessed” its own colour of the toy, so they could not spy on the neighbours.

Finally, the researchers tested the long-term memory of the animals: they suggested they take the test again three months later. All animals remembered that in order to get reinforcements, you need to crawl behind the toy, but not a single turtle remembered its colour the first time. However, in order to restore the skill, it took on average two times fewer sessions than before – about ten.

The last time scientists met with turtles was 9 years after the main experiment. Three turtles of the Vienna zoo survived, but only one was able to repeat the experience. It turned out that it still remembered how to react to the toy.

Thus, the authors of the work confirmed that turtles have a long-term memory, and are capable of performing tasks of various types: not only to respond to a stimulus, but also to choose between several stimuli. In addition, they found social behavior in turtles, as animals in the group learned faster than individually. Perhaps scientists believe that in the wild, turtles also communicate in this way – locate resources while observing neighbors, or look at each other.