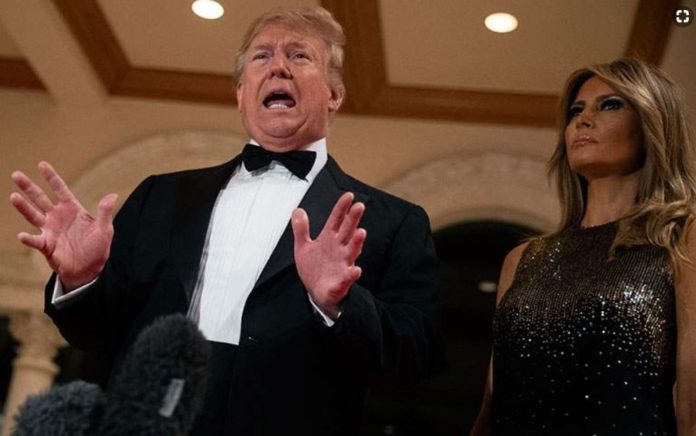 Donald Trump threatened on Tuesday that he would make Tehran pay “a very high price” after the US embassy in Baghdad was attacked by thousands of protesters deemed to be affiliated with Iraqi Shia armed group.

Iran “will be fully responsible for the loss of lives or damage to our facilities. It will pay a very big price! This is not a warning, it is a threat”, the US Republican President said via Twitter.

However, a few hours later, US President Donald Trump reassured that he did not want, or plan, for the United States to engage in war with Iran.

Asked if the tension between Washington and Tehran could escalate and the two countries become involved in an armed conflict, Trump responded to reporters at his private club in Mar-a-Lago, Florida: “Do I want this? No. I want to have peace. I love peace. And Iran needs to love peace more than anyone. So I don’t see it happening”.

TEHRAN has flatly denied US accusations of involvement in episodes that broke out Tuesday in Baghdad. They referred to Washington’s “stupendous frenzy” as they see Iran’s involvement in protests in the Iraqi capital following US bombings Sunday that resulted in the loss of at least 25 Iraqi paramilitaries of Hezbollah brigades.

US Defense Secretary Mark Esper has announced that an additional 750 US troops will be deployed “immediately” in the Middle East region, “in response to recent developments in Iraq”.

While US Secretary of State Mike Pompeo has argued that the “attack” on the US embassy in the Iraqi capital was a “terrorist” job.

The attack was “orchestrated by terrorists – Abu Mahdi al-Muhammad and Qais al-Khazali – and backed by Iran’s allies, Khadi al-Amari and Faleh al-Fayyad“, Pompeo said via Twitter. “All of them were photographed in front of our embassy”, he added, accompanying the post with three photographic snapshots.

Tehran, for its part, has denounced Washington’s “stupendous brazenness”, accusing it of incidents in Baghdad in protest of US bombardments that resulted in the killing of at least 25 Kata’ib Hezbollah militants.

On Friday night, a lethal rocket attack on an Iraqi military base killed an American private security contractor in Iraq. On Sunday night, US aircraft retaliated by bombing the base of Kata’ib Hezbollah, an Iranian-affiliated organization that Washington claimed was responsible for the rocket attack. The bombings killed 25 fighters and triggered a wave of indignation even at the highest level of Iraqi political leadership.

Yesterday Tuesday, the procession of the 25th paramilitary funeral turned into a demonstration in front of the US Embassy in Baghdad, with many of the participants firing various objects against the building such as stones.

On Tuesday night through Wednesday, hundreds of supporters of pro-Iranian paramilitary organizations continued to stage a sit-in protest around the embassy, ​​without violent incidents anymore.

Yesterday morning, thousands of fighters and supporters of Hashed al-Shaabi (“Popular Mobilization Units”, a coalition of militant groups dominated by pro-Iranian Shia groups that have now joined the regular Iraqi army), went to Prague without leaving. Iraqi forces at the entrances to this area of ​​Baghdad where draconian security measures are normally applied.

The Green Zone, where the US Embassy and Iraqi institutions are located, is largely hermetically closed and tightly guarded.

The protesters set up and set fire to the guard at the embassy entrance, but failed to enter the compound. They threw stones at the gate and the turrets of the guard and covered the armored windows with the flags of Hashd and Hezbollah brigades.

US forces inside the embassy fired warning shots into the air with genuine fire and used tear-shells and grenades to repel the demonstrators. Hashed al-Shaabi said 75 people were injured.

Washington has raised the tone, demanding that Baghdad “protect the embassy” and saying the US is ready to “defend its own nationals”. Additional forces – marines and even attack helicopters – were deployed to the embassy, ​​but were not evacuated. The unnecessary diplomatic staff had already withdrawn in May. The US ambassador to Baghdad, on a private trip outside Iraq, returned to his post.

Two hours after the attack began, Iraqi Prime Minister Adel Abdel Mahdi urged the protesters to withdraw. His appeal was heard by some of them. Iraqi special forces were deployed around the embassy.

Yesterday afternoon, following numerous phone calls from Pompeo and Trump to Iraqi leaders, the US president thanked the Baghdad government for its “swift response” before turning its arrows on Iran.

The incidents at the US embassy, ​​according to a Hasid al-Shaba’i official, reminded of the 1979 hostage crisis in Tehran, while US politicians such as Lindsay Graham compared it to the attack in Benghazi.

The United States, which still holds more than 5,000 troops deployed in Iraq, is still viewed by many Iraqis as an occupation force. Washington and its allies invaded Iraq in 2003 and overthrew Saddam Hussein’s regime. Almost seventeen years later, political stability remains in demand.

Democratic politicians, who criticize Trump for his decision to withdraw the US from the 2015 international agreement on Iran’s nuclear program signed by his predecessor Barack Obama, condemned the incidents in Baghdad, seeing her as a jerk of the Republican President’s policy towards Iran.

“The foreseeable result of the risky policy of screams, escalations and miscalculations in the Middle East is that we are drawn even closer to a war with Iran without approval [by Congress], which the American people do not want”, he stressed. One of them is typically Tom Judal, a member of the Senate Committee on International Affairs.

I will not apologize, BJP’s uproar is to divert attention from...

Morales supporters clash with the opposition in Bolivian capital