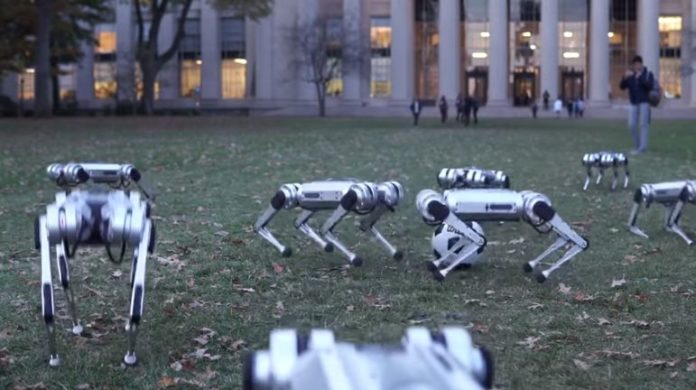 The Massachusetts Institute of Technology has posted a video of a walk of the Mini Cheetah robotic flock around the campus. A group of nine robots in automatic mode and under the control of operators walked around the campus, played soccer, ceilinged and did exercises and synchronous backflips. Thus, the developers tested the devices.

Developers from the Massachusetts Institute of Technology introduced the four-legged Mini Cheetah robot in March. This device can do back flips, land gently when falling from a height, and roll over when falling onto your back. The mass of the robot is 9 kilograms. it is able to run at speeds up to 8.8 kilometres per hour.

Over the past few years, Cheetah family robots have been seriously improved. They have become lighter, more compact and autonomous. In particular, the devices learned to run without a leash, to jump over the barrier with a run and to overcome obstacles blindly.

In September, engineers from the University of California at Berkeley showed the four-legged robot ALPHRED2 with an unusual design: its legs can bend in both directions, as well as rotate relative to each other. This unit, among other things, can use one leg to push the door or stand on two legs, maintaining balance.

A four-legged robot that can climb the vertical ladder