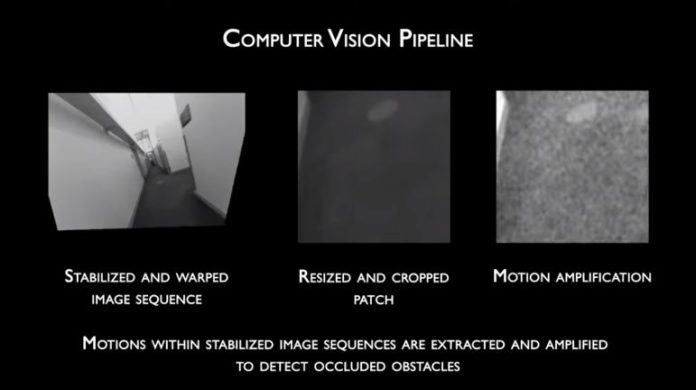 A team of American engineers have created a system that allows you to detect approaching objects due to the angle of their shadow or other changes in lighting. The developers tested this system on an unmanned vehicle, which could brake before another car drove out of the wall and crossed the path. This new system will be presented at the IROS 2019 conference.

In the field of unmanned vehicles, the concept prevails according to which a set of sensors working on different principles should be used in them: lidars, radars and cameras. This allows you to use the perception features of each type and combine their advantages for reliable tracking of objects, as well as duplication of systems.

However, all these sensors are used only for fixing objects that are in direct line of sight, while people also use indirect signs that suggest that the object is outside their field of vision. For example, a driver can guess that a car could leave behind a building after seeing light from its headlights or vice versa, a shadow during daylight hours, and also hear the noise of an engine and tires.

Researchers at the Massachusetts Institute of Technology and the Toyota Research Institute, led by Daniela Rus, have suggested supplementing direct observation of objects with conjectures made on the basis of such indirect features. So far, an article describing the system and experiments has not been published, but some conclusions can be drawn from this researcarticle on an earlier version of the algorithm.

The algorithm receives video from the camera, creates on its basis a three-dimensional model of the environment in the frame, and projects frames on it. After that, the system independently selects the zone of interest, for example, the corner of the wall. Then, as the wall approaches, the algorithm tracks this particular area and analyzes it. For analysis, saturation is enhanced in the images, which allows you to enhance the difference between the shadow and the illuminated area of ​​the floor. The algorithm then determines whether the shadow is moving, and based on this it can make a decision to stop.

For the testing, engineers tested the system not on a robot, but on an unmanned vehicle. On the published video, you can see that the car saw in advance the approach of another car to change the illumination of the floor. The developers note that the algorithms detected a moving obstacle by lighting changes 0.72 seconds earlier than according to the lidar.

There are other approaches to tracking obstacles around the corner. For example, last year Honda showed the work of the prototype of a smart intersection in the United States. It is equipped with cameras that recognize cars approaching the intersection, as well as antennas that transmit data about them to other cars nearby. Thanks to this, drivers receive information in advance that another car or pedestrian will appear around the corner.