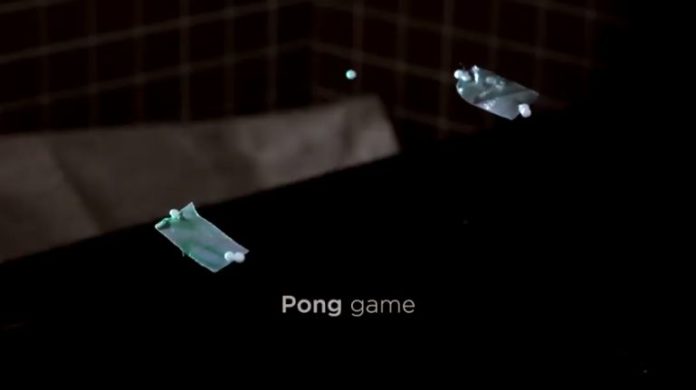 British and Spanish engineers have created a pseudo-holographic display based on acoustic levitation. It levitates an acoustically transparent fabric with polystyrene balls attached at the edges, which serve as anchors held in place by ultrasonic emitters. An image can be projected onto the fabric, and when it is rotated, the image can be adapted accordingly.

Sound is a propagating mechanical vibration, due to which the pressure periodically rises and falls at a certain point. Acoustic levitation works due to the fact that interference of coherent acoustic waves at certain parameters can lead to the formation of a standing wave in the air. Because of this, stable regions with high and low-pressure form in the air. If you place a light and small object in size comparable to the length of a standing wave in an area with reduced pressure, it will remain in the air, despite the force of gravity.

Based on this phenomenon, engineers have long been trying to develop various application devices, for example, displays. As a rule, they use an array of several dozen separate balls that can be regrouped and assembled into the desired shape. Engineers led by Diego Martinez of the University of Sussex created a levitating screen in which balls are used only as supporting elements, and an acoustically transparent piece of fabric is responsible for the output of information.

Engineers created an installation for levitation, consisting of two arrays of 16 to 16 ultrasonic emitters located opposite each other. In addition, the installation includes a system for tracking the positions of the balls. As software, the authors chose the free Ultraino acoustic levitator control system, and also added a plug-in to it. In it, the user can specify the shape of the levitating object, as well as mark the approximate location of the balls and the boundaries within which the program can shift them when calculating. In addition, the user can specify the axis of rotation of the item. After that, the program will calculate and issue the final diagram, according to which you can cut an object from the fabric and stick polystyrene balls to it.

The authors showed several examples of the system. On some of them, a piece of fabric simply rotates, while other demonstrations were more interactive. For example, engineers have shown that the system can be used to hang “notes” in the air, as well as to simulate the game in “Arkanoid”.

The smell of the mother calmed the babies