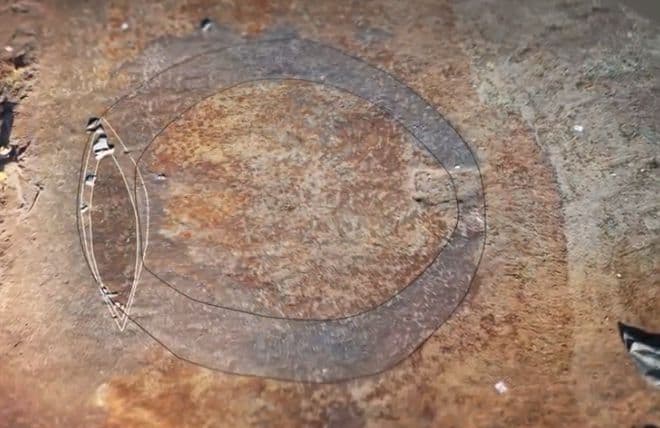 A team of Norwegian researchers have found a unique burial in the village of Vinjeøra, in central Norway, according to a press release from the Museum of the Norwegian University of Science and Technology (NTNU). It consisted of two funeral boats. In one of them with the remains of a Viking man, a hundred years later they placed another, this time with the remains of a woman. Burials were made in the VIII and IX centuries. According to the researchers, they are aware of double Viking burials in one mound, but they found funeral boats embedded in one another for the first time.

Currently, the archaeologists from the NTNU Museum are conducting security excavations before the construction of the highway. The work is being carried out in the village of Vinjeøra, where the Viking settlement was located in the Middle Ages. In September, researchers reported finding the remains of a burial mound with traces of a “house of the dead” inside. Presumably, such rare burials were built in order to propitiate the dead, so that they would not go outside and disturb the living, and also help their descendants to receive good harvests and ensure the fertility of people and pets.

But far more often, scientists find funeral boats or ships in which people with high social status were buried. In addition to swimming in the grave put burial gifts, which corresponded to the status of the deceased and could be useful to him in the afterlife. Presumably, the deceased went by ship or boat to the afterlife.

During excavations in Vinjeøra, Norwegian archaeologists found the remains of a large mound, and on one of its edges – a burial boat from seven to eight meters long with the remains of a woman. The burial was made in the second half of the 9th century. Judging by the preserved burial equipment, the woman had a high social status. Two gold-plated bronze clasps were preserved on her clothes, and a pearl necklace and a cross-shaped brooch made of Celtic ornaments were placed in her grave.

According to historian Aina Heen Pettersen of NTNU, which studies artefacts that the Vikings brought from the British Isles, brooches were made in Ireland. Vikings quite often used decorative elements of horse harness as decorations. On the back of the brooch, there are several attachments, for which the brooch could be hung on leather straps on the harness. And in order for the decoration to be worn on clothes, an unknown skilful man attached a pin to one of them. Pettersen explained that such artefacts served as insignia and said that their owner was either involved in the journey or helped organize it. “Viking voyages – whether it was trade trips or travel with other purposes – were central to Norwegian society. This meant that it was necessary to participate in them or in their organization not only for the sake of receiving material goods, but also to raise the status of the person and his family,” says Researcher.

The deceased woman was put in a funeral boat, but instead of preparing a separate grave for her, the villagers opened another burial, made a hundred years before. In it, and also in the funeral boat, was buried a man-warrior. The remains of a shield, spears and a sword were preserved, which is about nine meters long. Judging by the style of the sword, the burial was made in the 8th century. A funeral boat with a dead woman was placed in a Viking boat.

“I’ve heard that several burial ships were buried in one mound, but I’ve never seen one burial boat buried in another,” says Raymond Sauvage, an archaeologist at the NTNU. Scientists do not yet know how to explain such an unusual burial. Artifacts have been preserved in the burial, but only a part of the woman’s skull has been preserved from human remains. The researchers hope they can extract DNA from the bone tissue and investigate it, as well as perform isotopic analysis. It will help determine where the deceased was born and how she ate.

Physicists have reduced the noise of a bolometer ten times