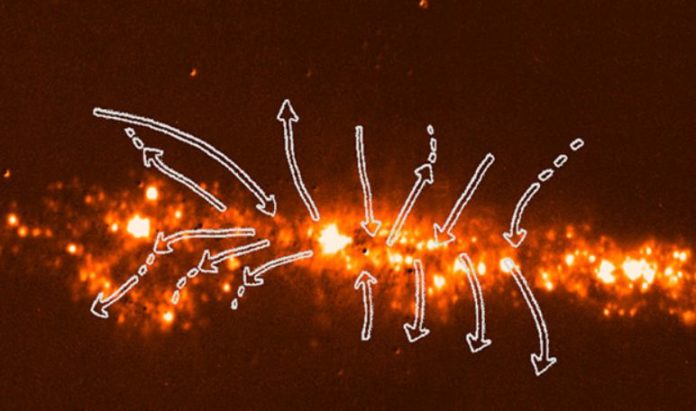 Astronomers have discovered the first galaxy that has a regular large-scale magnetic field, the direction of which changes in several places. This conclusion was made on the basis of observations of polarization of the radiation of the object. The results can be used to test hypotheses about the generation of galactic magnetic fields and their connection with intergalactic.

The magnetic field exists both within galaxies and in the space between them. However, it is difficult to study on such scales, as it is small, which is why there are few ways to evaluate it. As a result, full-fledged models of magnetic field generation by galaxies have not yet been built, and their relationship with intergalactic fields is poorly known.

The spiral galaxy NGC 4631, also known as the Whale Galaxy, is slightly smaller than the Milky Way, located at a distance of about 5 megaparsecs and is visible from the edge. Previously, astronomers have already found out that in the halo NGC 4631 magnetic field force lines are mainly oriented perpendicular to the plane of the galaxy, but the structure of the field is detailed investigated has not been investigated. In particular, it remained unknown whether the magnetic field has a regular structure or chaotic.

A team of Astronomers from Australia, Germany, Canada, France and the United States, with the participation of Marita Krause from The Max Planck Institute for Radio Astronomy, studied the object using an array of VLA radio telescopes and found out the structure of the field. It turned out that the field in the halo on both sides of the disk of the galaxy as a whole is regular, but at the same time observed areas with its opposite direction.  The measured induction turned out to be equal to four micro-Gausses, which is surprisingly much for a field at such a distance from the galaxy.

Information about the field was obtained due to the Faraday effect, which is to rotate the plane of polarization of radiation in the external magnetic field. The scientist measured the fraction of polarized radiation and Faraday depth, which shows the degree of Faraday’s rotation along the line of sight. The measurement of this quantity is the only way to clarify the structure of the field, since it vanishes or often changes the sign in the case of a chaotic field, but accumulates to large values ​​in absolute value in the case of a regular one.

“This is the first example of a situation where a large-scale magnetic field (coherent, as astronomers call it) is unequivocally recorded, far into the halo of a spiral galaxy, and its power lines have been lined up in the same direction for thousands of light-years, Krause explains. “Moreover, we see the direction of this field changing in a natural way.”

The obtained results became one of the rare reliable confirmations of the model of magnetic field generation by means of a dynamo-mechanism of the galactic scale. According to this theory, a spiral magnetic field should arise, the structure of which is a continuation of the spiral branches of the disk.

Early dark energy will solve the problem of the Hubble constant

Traces of Ebola viruses found in the blood of Indian bat...

Voyagers helped determine the speed of sound in the heliospheric mantle

Scientists find how “Taurine” can help human skin from drying out...