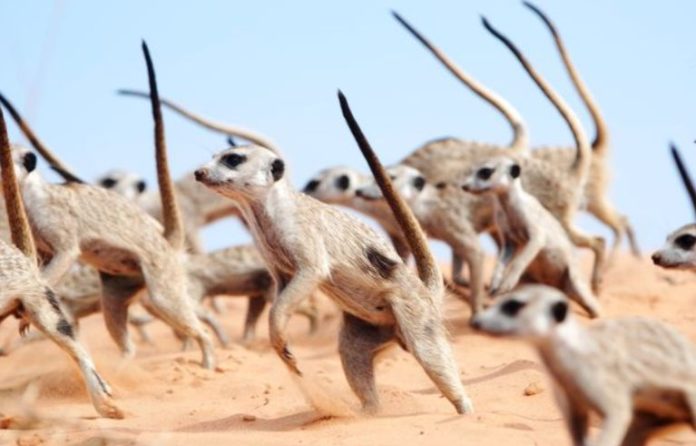 Scientists recorded several hundred skirmishes between groups of meerkats and found that they are extremely aggressive towards other people’s groups, but tend to show aggression at a distance. More often than not, the intimidating “battle dance” was enough to put the enemy to flight. In addition, the researchers found that most often numerous groups with cubs win – despite the fact that the cubs are most at risk of dying in battle. The study is published in the journal Proceedings of the Royal Society B.

Meerkats are highly social animals that live in groups of about two dozen individuals. There is a strict hierarchy within the group, including the reproductive one: dominant males and females produce 80 per cent of all offspring. The structure of the meerkat society has already been studied quite well, and it is known that within the group they can both cooperate (for example, set a sentinel) and show aggression. However, much less is known about the intergroup aggression of meerkats.

Mark Dyble of Cambridge University and his colleagues have been watching meerkats in the Kalahari Desert for 11 years. In total, they studied the behaviour of 10 groups and recorded 422 episodes of intergroup interactions.

Researchers identified six paths when two meerkat units met. The group could observe the enemy, drive away the enemy, take a combat pose (elongated tail and ruffled wool), leave the battlefield, break open the enemy’s hole or enter into a fight. The fight was based on the principle of “wall to wall” – all members of the group participated in it, except for small cubs.

However, it rarely came to a fight. Of the 422 intergroup meetings in 149 cases, one of the groups escaped as soon as they saw the enemy, in 235 – escaped when they saw the battle dance of the enemy, in 25 – escaped directly during the battle, and only in 13 cases the scientists recorded a fatal outcome, and most of the babies died. Thus, in 64.7 per cent of cases, meerkats in one way or another showed aggression, but in 86 per cent of cases they managed to do without a real fight.

Then the scientists calculated what the outcome of the collision depends on. The size of the group turned out to be the most significant factor: if one group was twice as numerous as the other, its chances of winning increased one and a half times. In addition, the presence of cubs turned out to be useful: despite the fact that they die if it comes to fighting, a group with cubs was 1.4 times more likely to win than a group of adult meerkats alone.

The researchers did not find other patterns: neither the sex ratio within the group, nor the degree of relationship between the individuals of which it consists, nor the location of the meeting place relative to the center of the group’s territory, significantly affected its chances of winning (p> 0.05)

The outcome of the battle could lead to different consequences for both groups of meerkats. 32 percent of winners and 48 percent of losers “moved” that evening, that is, left their hole. The losers were looking for a new place to live closer to the center of their territory (on average by 156 meters), while the winners, on the contrary, expanded their possessions and moved towards the periphery (on average by 122 meters), more often – to the direction where the territory of the losers was located.

It was once believed that intergroup aggression is characteristic only of humans, but since then it has been found in many species of animals, and meerkats are just one example from a long list. In conclusion, the authors of the work draw attention to the fact that the combination of intra-group cooperation (especially in social animals such as meerkats) and inter-group aggression allows us to study how the combination of phenotypes of individual individuals affects the success of a group, and to consider an entire social group as a unit of natural selection.

2I / Borisov is the official name of the first interstellar...

Sedentary infusion once again behaved hard in the absence of the...