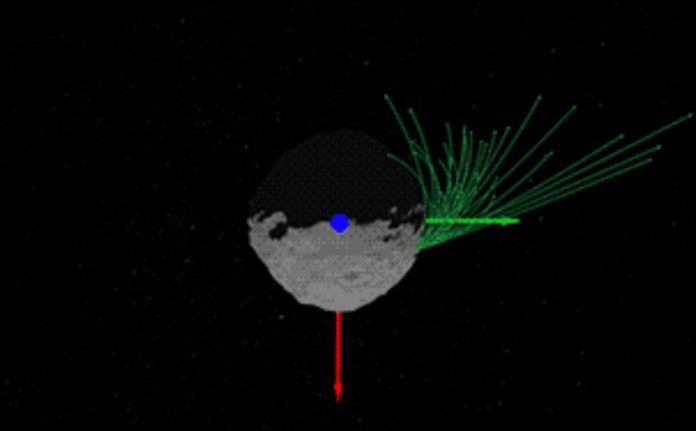 Data collected by the OSIRIS-REx interplanetary station helped astronomers classify near-Earth asteroid Bennu as active. It turned out that this object periodically creates dust emissions – and this has been repeatedly fixed by the device.

Active asteroids are one of the types of small bodies in the solar system: they have typical orbits for asteroids, but they also show a certain level of activity in the form of dust emissions or the formation of a coma or tail, similar to comet ones. Several objects from the Main Asteroid Belt and from near-Earth asteroid families exhibit similar activity over long periods of time: for example, 133P / Elst — Pizarro behaves like a comet near its perihelion. Other active asteroids generate dust emissions for short periods of time or during the decay process into separate parts.

A team of researchers led by Dante Lauretta analyzed the data collected by the interplanetary station OSIRIS-REx, which operates near the 500-meter near-Earth asteroid (101955) Bennu. Using the TAGCAMS system’s on-board cameras, the device recorded three large emissions of dust particles from the surface of the asteroid that occurred on January 6 and 19 and February 11, 2019, as well as a number of similar events (their reliability, however, is questionable). Scientists were interested in the sources of these emissions, the size of the departed dust particles, as well as their trajectories and emission mechanisms.

It turned out that particles with diameters from less than one to ten centimeters with a speed in the range from less than 0.05 to more than three meters per second flew off the Bennu surface. The mass loss of the asteroid from December 31 to February 18, 2019 (including three large emissions) amounted to about one kilogram, and the average mass loss rate of 10 -4grams per second is several orders of magnitude less than the same value obtained for others showing asteroid activity (from 10 to 10 3 grams per second).

The estimated sources of large emissions were located in the southern hemisphere of the asteroid and in the equatorial part: they show no clear differences from other places on Bennu in the geological plan. All the events took place closer to the evening time when the device recorded up to two hundred particles. Particle trajectory simulations show that some of them return back to the surface of the asteroid, while others leave it, but dust particles are almost constantly present in the vicinity of an asteroid.

It is assumed that Bennu may have three mechanisms for generating such emissions: asteroid collisions with meteorites, dehydration of phyllosilicates, which are part of the Bennu’s substances, as well as the explosive destruction of rocks due to sharp heating and cooling. The latter may be due to too fast a change of day and night on an asteroid.

The results of the Galaxy Zoo project force us to revise...

Asteroid dust may have plunged Earth into an ice age millions...