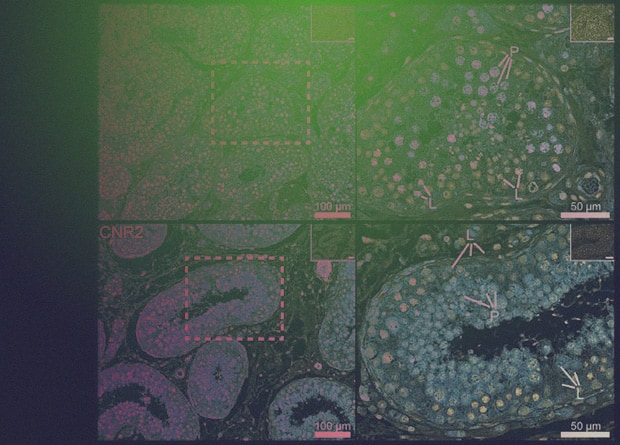 European researchers have found cannabinoid receptors and enzymes in human testis cells that can be involved in endocannabinoid metabolism. This report will help to understand how tetrahydrocannabinol (THC), which is found in marijuana, affects sperm quality.

Since the 1970s, marijuana has been known to negatively affect sperm quality: after taking it, for example, sperm count is reduced. Also, THC (one of the active substances in marijuana)  increases the risk of developing testicular cancer. THC is an analogue of endocannabinoids, the neurotransmitters of the endocannabinoid system (EX) of the body. It also includes enzymes involved in the metabolism of endocannabinoids, and CNR1 and CNR2 receptors, with which THC also interacts. At the level of the nervous system, ECS is involved in the perception of pain, stress, the formation of appetite, in other systems – in the metabolism of bone tissue and in the reproductive system.

The data on the work of EX in the testes of humans and the effect of THC on it, however, are incomplete and contradictory: for example, in the cells of the testes of mice, many components of EX were detected at the transcript level, and the shutdown of the CNR1 receptor led to impaired reproductive function.

Scientists led by Niels Skakkebaek of the University of Copenhagen systematized data on the presence of ECS components in human testes. To do this, they stained human testes with labeled antibodies to receptors and enzymes and analyzed cell transcripts. The authors also estimated the number of receptors and their iso forms by quantitative polymerase chain reaction (qPCR) and tried to determine the presence of endocannabinoids using laser ionization ( MALDI  – matrix-activated laser desorption / ionization).

In general, enzymes (both synthesizing and destroying endocannabinoids) were found in testis cells both in the form of transcripts and in the form of proteins. It is interesting that at the beginning of maturation of the early sperm precursors – spermatogonia – the number of ECS components decreases, and at the end of maturation, on the contrary, the enzymes become much larger. This probably provides future sperm cells with the necessary amount of endocannabinoids to work after leaving the testis. The detected endocannabinoid receptors CNR1 and CNR2 are needed by maturing germ cells, most likely to receive signals for the rearrangement of chromatin in the nucleus during fission.

As for the somatic cells of the testis, in  Sertoli cells  – the “nannies” of young sperm cells that protect the maturing cells from the body’s immune system – they also found a small amount of ECS components. Perhaps this is due to the fact that such cells, unlike sperm precursors, rarely divide. In Leydig cells, which carry out hormonal regulation of spermatogenesis, a large amount of the enzyme synthesizing endocannabinoid anandamide was found, and both versions of the ECS receptors (CNR1 and CNR2): probably, anandamide is involved in the synthesis of hormones by Leydig cells.

A description of the work of EX in the testes will help to understand the relationship between THC and spermatogenesis during further experiments. Scientists suggest that THC binds to sperm precursor receptors and affects their division.

Acupuncture and endorphins reduced craving for alcohol in rats