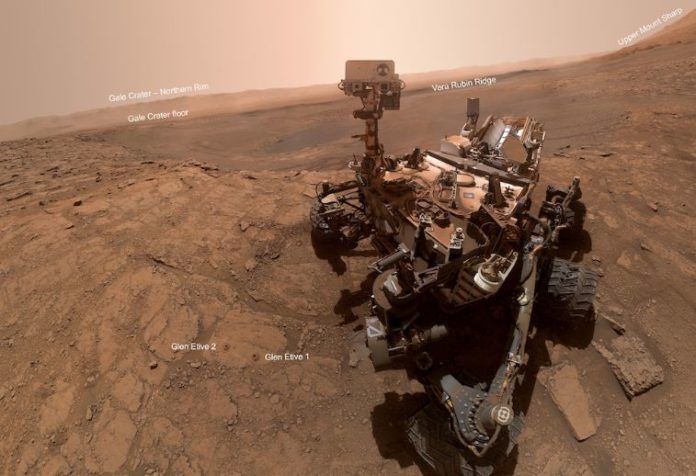 The Curiosity rover has sent a new selfie from Mars, created from pictures taken by a camera mounted on its robotic arm. The shot included the landscape of the Gail crater and the location of drilling and sampling of Martian soil by the rover, according to the NASA Jet Propulsion Laboratory website.

Curiosity began its work on Mars in 2012 as part of the NASA mission, the Martian Science Laboratory. For more than seven years, he overcame more than 21 kilometres, studying the geological history and atmosphere of the Red Planet. The main goal of the rover was the five-kilometre Mount Sharpe, located in the centre of the Gale Crater and covered with an array of eroded layers of sedimentary rocks.

In April of this year, drilling operations began at the foot of the mountain, the result of which was the discovery of the highest concentration of clay minerals formed in the presence of water that Curiosity had ever found during its work.

The Mars rover has repeatedly created its selfies, for this purpose it uses the MAHLI camera (Mars Hand Lens Imager), mounted on the end of a 2.1-meter robotic manipulator. The obtained images are transmitted to the Earth, where specialists make a mosaic image out of them, while the manipulator itself does not get into the frame. The new selfie was made up of 57 frames received by the rover on October 11, 2019, when he was next to the Glen Etive site, where he conducted drilling operations twice. Wells in the ground created by the rover are visible to its left. Behind the rover, three hundred meters from it, you can see the Vera Rubin Ridge ridge and the slope of Mount Sharpe, and behind them is the northern rampart of Gale Crater.

“Curiosity” has already made many discoveries, in particular, it was able to determine the age of rocks containing organic matter, proved the salinity of the disappeared ancient lake, discovered mud cracks remaining after drying of streams, and a layer cake from sedimentary rocks, survived a dust storm and breakage of the drill. In addition, the rover helps to detect the mysterious bursts of methane in the atmosphere of Mars.