Gravitational lensing has helped the Hubble Space Telescope detect the smallest clusters of dark matter. The masses of these formations are in the range of millions of solar – this is 5-6 orders of magnitude below the mass of a large galaxy, such as the Milky Way. Studying detected clots will help discard incorrect theories about the nature of dark matter and get closer to understanding the right ones, the authors said at the American Convention astronomical society.

When analyzing a number of astronomical observations, taking into account only known physical laws and types of matter, inconsistencies may arise: for example, the problem of rotation curves of galaxies. To explain them, scientists put forward various theories, which are usually called models of dark matter. Most of them assume that dark matter is a new component of the Universe, and it consists of particles without electromagnetic interaction. In this case, particles of dark matter can form clumps – just like ordinary matter gathers in galaxies.

Many of the proposed variants of dark matter give the same predictions for quantities that can now be verified reliably: for example, the parameters of galactic evolution. They can be distinguished, for example, by searching for low-mass objects from dark matter: in some models the formation of small structures is difficult, while in others there are no such restrictions. So far, astronomers, however, have insufficient data for this.

With the help of Hubble, American astronomers led by Anna Nierenberg from NASA’s Jet Propulsion Laboratory examined in detail eight quasars whose light was distorted by Gravitational lensing: The refractive body was an invisible object with a mass of about 10 8 solar and less.

The objects for observation were selected from the catalogues in such a way that their light formed the configuration of Einstein’s cross, that is, four separate sources, so only happens in the case of a very close hit of a refractive object on the beam of vision. This allowed determining with high accuracy the mass and size of the light-distorting body.

The detected small masses of clusters already make models of warm dark matter unlikely, since they assume rather high particle velocities that do not allow small structures to form. Moreover, their existence is not prohibited within the framework of the standard model of cold dark matter, the particles of which must have sufficiently high masses and low speeds compared to light.

Over the next few years, next-generation survey instruments such as the ground-based LSST and Euclid space will begin work. As a result of their work, at least an order of magnitude more quasars with lensing in the form of an Einstein cross can be discovered, which will allow us to study dark matter models at a new level of detail. 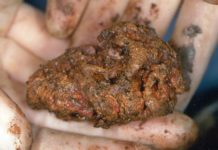 The brain piece of a decapitated man who has survived 2,600 years

Lightning as a trigger: MIT Thinks That Life On Earth Is...

A new trial of the genetic editing of Crispr on the...

WHO confirms that Microplastic in water is not dangerous to health

Lithium-metal batteries: are we at the turning point?