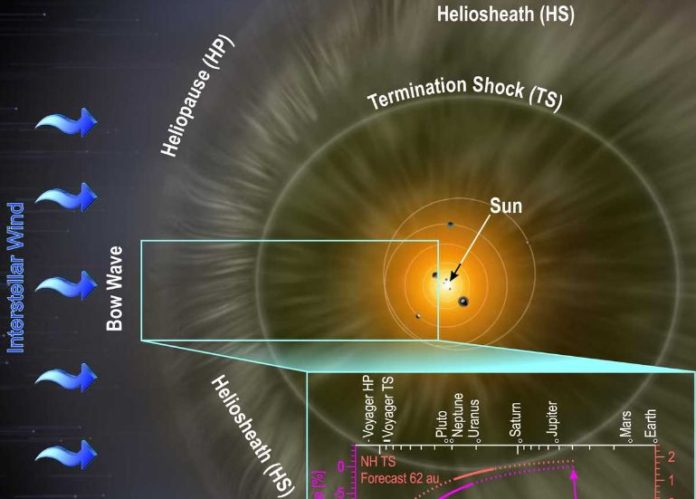 Astronomers have confirmed the slowdown and heating of the solar wind flow outside Pluto’s orbit, which are associated with the capture of interstellar neutrals. Data collected from the New Horizons interplanetary station provides more information about the outer region of the heliosphere.

Currently, the New Horizons interplanetary station, equipped with the SWAP (Solar Wind Around Pluto) tool, is the only source of data on the behaviour of the solar wind and interstellar ions outside the orbit of Mars. The device moves in the ecliptic plane and the device’s capabilities allow you to directly compare the number of interstellar gas ions captured by the solar wind and the magnitude of the deceleration and heating of the solar plasma flow in the outer part of the heliosphere.

A team of astronomers led by Heather Elliott reported on the results of an analysis of data accumulated by the SWAP instrument when New Horizons was between 21 and 42 astronomical units from the sun, and their comparison with data from ACE and STEREO, which work at a distance of about one astronomical unit from a star.

It turned out that in the range of distances from 21 to 42 astronomical units from the Sun (outside the orbit of Pluto), the density of the solar wind gradually decreases, and the temperature rises, while it turns out to be higher than expected for the adiabatic profile of the dependence of temperature on distance. The decrease in the solar wind speed due to the capture of interstellar matter for distances of 30–43 astronomical units from the Sun is from 5 to 7 per cent of the original value. Scientists have also determined that the polytropic index for the solar wind decreases linearly with increasing distance from the Sun.

The data obtained are consistent with the simulation results. It is worth noting that it is rather difficult to determine what contributes more to the increase in the temperature of the solar wind at such distances from the Sun – interstellar neutrals or an increase in the number of particles of the fast solar wind. New Horizons is expected to cross the boundary of the shock wave, where the speed of the solar wind ceases to be supersonic, in the middle of the next decade.

How some mosquitoes have already managed to become resistant to insecticides