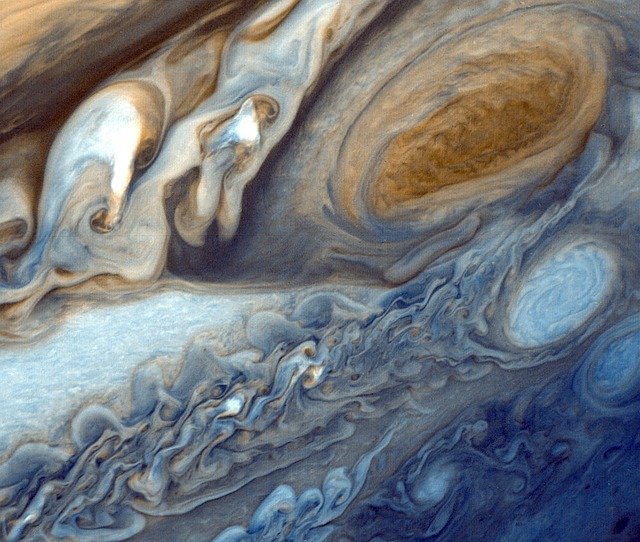 Astrophysicists have presented the results of numerical simulations of a giant storm on Jupiter, according to which the true size of the vortex does not change, despite the reduction in the size of the part of the atmosphere that it carries away. The reason for the observed behaviour is a certain configuration of the perturbation, because of which the small vortices interacting with the spot repel it and do not merge with it, scientists said in a report at the congress of the Hydrodynamics section of the American Physical Society.

The Great Red Spot on Jupiter is a major atmospheric storm that has been raging on the planet for at least almost 200 years. The first historical information about it dates back to the end of the 17th century, but it has been continuously observed since 1830. Over the past decades, the object has been investigated in detail by both ground-based telescopes and spacecraft such as Voyager and Juno.

The long series of photographs clearly show the contraction of the outer size of the Great Red Spot, that is, the area of ​​reddish clouds on the surface of the planet. In particular, in the spring of 2019, researchers recorded a separation of several red “flakes” from the main spot. However, Jupiter does not have a clear surface, so large vortexes in its atmosphere go deep into its thickness and the dynamics of the storm in the bowels of the giant planet is not known exactly.

A team of astrophysicists led by Philip Marcus from the University of California, Berkeley have created a new hydrodynamic model of gas motion that predicts an unchanging intensity of the vortex at depth. According to the authors of the work, their results show that the reduction of the part of the cloud cover involved in the circle does not indicate the attenuation of the storm itself.

Physicists claim that the Great Red Spot has two characteristic boundaries, and none of these boundaries coincides with the cloud cover visible from the outside. On the one hand, this is a region with anomalous potential vorticity, and on the other, the position of the last closed streamline. Potential vorticity is a quantity that remains in the absence of dissipation, depending on the presence of circular motions in the medium and its stratification.

According to the author’s conclusions, the region between the boundary of the potential vorticity jump and the last closed current line can vary. In a state with a large area of ​​this zone, small vortices that are close to the Spot are absorbed, and it grows. However, if this region is small, then the vortices will be torn off near the critical point of flow deceleration, and there will always be at least one on the last closed streamline.

If this model is correct, then the separation of “flakes” observed in the spring can be interpreted as an extruded small vortex that came close to the Spot. It also follows from the work of scientists that a secondary circulation of matter created by a vertical temperature gradient should exist near the Spot. It is this movement that feeds the storm itself, allowing it to exist for centuries, despite viscosity, friction, and other forms of energy loss.

Ripples of an ancient star helped limit the change in the...