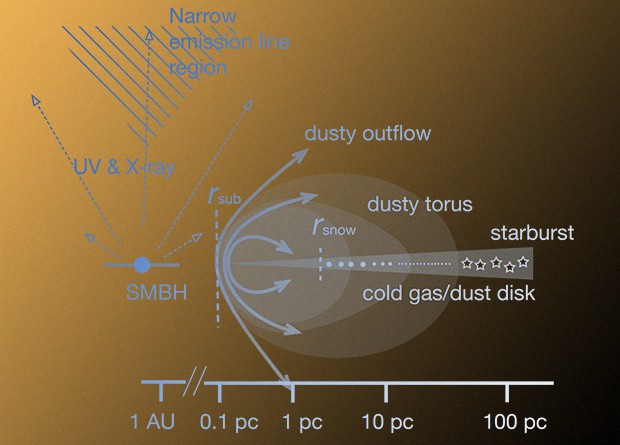 Astrophysicists have theoretically justified the possibility of the formation of planets around supermassive black holes in the centers of active galactic nucleus with low luminosity. Due to the specific conditions in the vicinity of such objects, scientists allow the appearance of thousands of planets with masses of ten earthly.

The standard theory of planet formation claims that planets arise as a result of the gradual sticking together, and then the attraction of dust particles in a proto-planetary disk around stars. That is why it is usually believed that the formation of planets is a process concomitant with the life of stars. Theoretically, however, nothing prevents dust from spinning in orbit around, for example, a black hole, and scientists have already considered the possibility of the existence of planets, including inhabited, in orbits of black stellar masses.

In the work of Japanese astrophysicists led by Keiichi Wada of Kagoshima University, the possibility of the formation of planets in supermassive black holes is theoretically studied for the first time: such objects are located in the centers of galaxies and in mass exceed the Sun by millions or even billions of times.

The authors suggested the presence of a gas-dust disk in a wide orbit near a black hole, which is quite realistic, since the existence of a geometrically and optically thick torus follows from the properties of galaxies with active nucleus. In the studied theoretical model, the planets are formed at a great distance (about 1-100 parsecs) from the black hole. At such distances, the relativistic effects of gravity of the black hole does not actually appear, therefore, theoretically, the formation of planets follows a similar to the circumstellar scenario.

However, there are differences. Firstly, due to the colossal dimensions of such a system, the simultaneous existence of thousands of planets orbiting a black hole is possible. Secondly, there is an inner radius of the proto-planetary disk, on which all matter evaporates under the influence of intense radiation from the accretion disk directly next to the black hole. Thirdly, the mass fraction of dust around a black hole can be an order of magnitude greater than that of a star. Finally, fourthly, at the early stages of planet formation, the relative particle velocities in the disk at the black hole will be much lower, which is why the growth of stone body nuclei will go faster.

The low relative speeds are also associated with the absence of a “radial drift barrier”, which is sometimes also called a “meter barrier”. This effect consists in a gas enthusiasm for beginners to form in the disk of bodies, which ultimately leads to their fall on the star. In the case of a black hole, this effect is virtually absent, which favors the growth of large planets.

Scientists also evaluate the potential for detecting such bodies, but they conclude that it will be extremely difficult. The only possible ways they call the search for spectral traces of variable disk transparency in the millimeter region of the spectrum, as well as observation using a hypothetical space interferometer hard X-ray range.

A glass-shaped aluminum oxide, which can be stretched, compressed and bent...

SpaceX: The Starship Mk1 is ready to take us to Mars