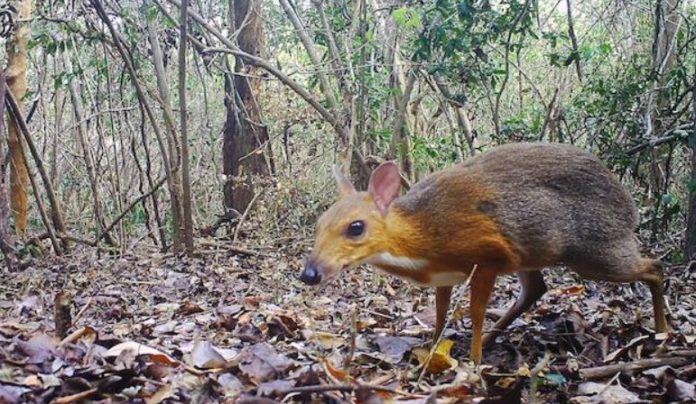 A team of zoologists from the Southern Institute of Ecology, Vietnam Academy of Sciences, along with a colleague, received the first evidence in many years that a Vietnamese deer still inhabits Vietnam. The zoologists managed to photograph a Vietnamese deer (Tragulus Versicolor), a representative of the Olenkov family, who has not been seen since the end of the last century. Over three months of observation, several individuals were able to photograph more than two hundred times.

Vietnamese reindeer is a member of the genus Asian deer family (Tragulidae), first described in the early 20th century: in literature, the first mention of this animal dates back to 1910. The species is characterized by the characteristic greyish colour of the back and the absence of stripes on the neck – a sign that characterizes another species of deer, T. kanchil.

Observing the representatives of this species has always been quite a challenge because of the small size and colour. In addition, at the end of the last century, hunting was widespread in the habitat of Vietnamese deer. The species, therefore, has not been observed in nature for almost 30 years, but it has not been officially assigned conservation status.

Scientists placed camera traps in the south of Vietnam – in places where the appearance of a Vietnamese deer was previously recorded (including, for example, the area near the city of Nha Trang). Observations were conducted from April to July 2018, during which time scientists were able to obtain 1881 photographs of Vietnamese deer (a total of 209 individual events) on 15 of the 29 established traps.

So far, zoologists cannot accurately estimate the number of deer living in the studied regions. The species, however, can be considered newly discovered. At the same time, according to scientists, a survey of local residents showed that at least in the habitat of the Vietnamese deer, the species itself was not considered lost – local residents regularly saw deer.

Photo or camera traps are one of the most common ways of observing animals in the wild: it is used not only in cases where it is necessary to guard representatives of rare species but also in order to study the behaviour of animals.

Fluctuations in the patterns of old people’s movements were associated with...

Even Darwin did not believe that human races existed