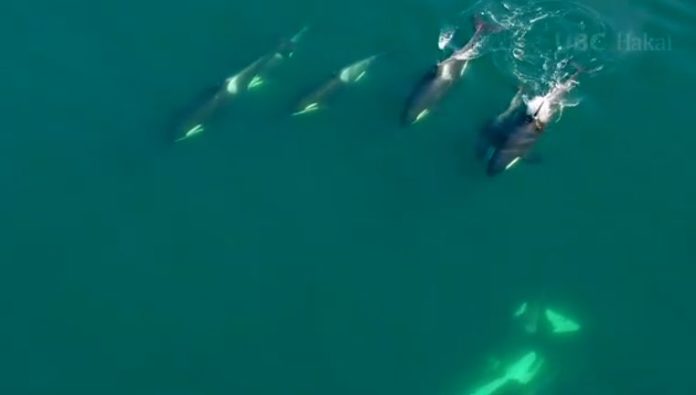 Marine biologists have captured the rare images of northern and southern resident killer whales. Researchers saw how a three-month-old cub from the southern population, who so far only feeds on milk, carries fish in his teeth, as well as a mother and a cub from the northern population communicate and play with each other.

Off the coast of British Columbia, the southern and northern resident killer whale populations live. The first, the smallest in the North Pacific Ocean, migrate from Vancouver Island to the coast of Central California. Now it has 73 individuals, the smallest number in the last 30 years. The population is listed in the US Red Book in the status of “endangered species.” The northern population combines about 300 killer whales, which are found to the north, from the coast of British Columbia to Alaska. Although the number of northern resident killer whales is growing now, they are classified as vulnerable species. Among the reasons that threaten the well-being of these animals, scientists call water pollution, the movement of marine vessels and the noise they make overtakes of chinook salmon – the main food of resident killer whales.

In August and September 2019, scientists from the University of British Columbia and the Hakai Institute watched killer whales from the northern and southern resident populations for three weeks, filming them from the ship and from underwater, as well as from the air using drones. Scientists wanted to closely study what animals eat and how they hunt. They attached blocks with a speed sensor and a GPS tracker to the backs of some individuals, and researchers used hydroacoustic devices to estimate the number of fish in the places of killer whale movement. They also studied the properties of water, in particular, measured its temperature and salinity.

To process all the data obtained, it takes several months, but scientists summed up the preliminary results of the study. They compared the hunting areas of both populations and the number of chinook salmon in these places, as well as how killer whales hunted and concluded that, most likely, chinook salmon were not enough in the habitats of the southern resident population. Northern killer whales have less habitat, but there are more fish in it. So far, however, this is only the impression of researchers. For an accurate answer to this question, they do not have enough data. Now they estimate the abundance, size and nutritional value of Chinook salmon, which is found in the hunting grounds of both populations.

Using video footage, the scientists observed the behaviour of resident killer whales and found that they are very playful and communicate much more than thought. “We watched a female and her cub from the northern population,” said study co-leader Andrew Trites from the University of British Columbia. “Watching them from the boat, we could only say that they were swimming next to each other. But only the drone allowed us to notice how often they touch each other and how much they communicate.”