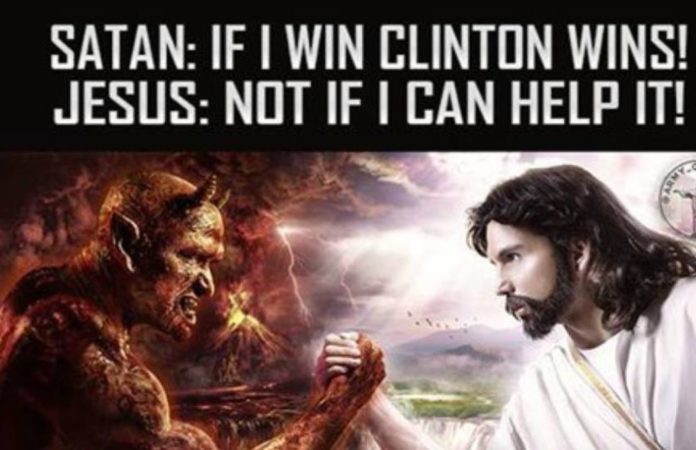 ‘Memes’ created by Russian groups in 2016 are being reused today, and are expected to continue growing for the US elections in 2020. There are Russian ‘memes’ for a while

In mid-August, Democratic presidential candidate Michael Bennet published a book entitled ‘Dividing America‘ in which he compiled the most shocking Russian ‘memes’ used in the US and analyzed the techniques used to deepen polarization. He did it out of pure political interest: by calling attention to the extent to which Russia had tried to interfere in the 2016 elections, he attacked the leader of the Republican majority in the Senate, Mitch McConnell, who had just blocked three proposed laws aimed at combat foreign interference in future electoral processes. The publication, in any case, has once again aroused interest in these memes, which remain pure dynamite.

Using the algorithms generated by the social networks themselves, which show pages of “similar interests”, the Russian operatives managed to create a wide network of potential objectives to be bombarded with misinformation and political memes. The strategy was gradual, first using more or less harmless humorous ‘posts’ and using a wide range of cultural references, such as Pokemon, SpongeBob, Beyonce or the Simpsons to gain followers.

In these operations, highlights the so-called Internet Research Agency (IRA), the popularly known as ‘St. Petersburg’ trolls farm, “The IRA demonstrated its fluency in the American culture of ‘trolling’,” says a report from the New knowledge cybersecurity firm, hired by the Senate Intelligence Committee to analyze the Russian campaign.

Once these hearings were established, those responsible went on to more and more political messages, adding subtle elements such as “give ‘Like’ if you agree” at the end of the post, to classify these receivers according to their preferences. For example, those users who had demonstrated religious sensibilities were drawn to a page created by the IRA called “Army of Jesus”, with messages like this: “Fighting with your addiction to masturbation? Come with me and we will defeat her together. Signed: Jesus”. Once they became members of the page, their users began to be exposed to messages that identified Hillary Clinton with Satan.

Although it is not clear to what extent Russian efforts have influenced the results of the elections, their possible impact should not be neglected. According to data from Bennet’s book, between 2015 and 2017 the Russians created 81 Facebook pages, 3,841 Twitter accounts, 133 Instagram accounts and 17 YouTube accounts. These accounts created almost 10 and a half million tweets, 116,000 Instagram posts, 61,500 Facebook posts and about 1,100 YouTube videos. Together, they managed to generate more than 200 million interactions.

Most of these posts tried to exploit some common identity trait, such as support (or rejection) for the free possession of firearms, immigration posture, religious beliefs or race. In addition to accentuating polarization, there was a clearly electoral objective: to promote the vote for Donald Trump, to divide the Democrats and to reduce the participation of the African-American community, traditionally more likely to vote for the Democratic Party.

For this, they sought to increase the disdain of supporters of Bernie Sanders by Hillary Clinton, for example by emphasizing the austere style of the Vermont senator in the face of the alleged corruptions of the former Secretary of State, in an attempt to encourage electoral abstinence. Among the pages addressed to Republicans, terms like ‘Hitlery’ were all the rage.

“An effective polarization can occur when the idea that ‘I like my group but I don’t like the other group’ is emphasized, and the distance between the two extremes is promoted”, says Young Mie Kim, a researcher on campaigns of influence on social networks of the University of Wisconsin-Madison. “And we know that the Russians went to extremes and then returned with different negative messages that may not be aimed at converting voters, but reducing participation and undermining the democratic process”.

In that sense, the operation was directed towards one of the main gaps of American society: the racial issue. Of the 3,500 ads posted on social networks between 2015 and 2017, more than half, about 1,950, made express references to the breed. The Russians created pages like ‘Don’t Shoot US’ or ‘Black Matters’, to promote African-American identity and victimhood in the face of police brutality and racism, while promoting racist memes and openly discriminatory content pages.

A chapter not closed

The Russian campaign did not end with Trump’s victory, but 2017 marked its peak. The messages, however, changed. In the months after the elections, some 70 ‘posts’ on Instagram and Facebook mocked the existence of an alleged ‘Russian plot’ and promoted the idea of ​​the alleged witch hunt against Trump. “Have you lost something and you don’t know what to do? Blame it on Russian hackers“, one of these publications said ironically.

But the reality, according to specialists, is that things remain more or less the same. In July, both special prosecutor Robert Mueller and FBI general director Christopher Wray warned at the Capitol of the Kremlin’s interference intentions. “The Russians fully intend to try to interfere in our elections [in 2020]“, Wray said at a Senate Judiciary Committee hearing. They are not the only ones. Other foreign powers, such as Iran, have followed suit, trying to hack Trump’s campaign committee servers and launching several influential operations on social networks.

In that context – and although both the Kremlin and its adversaries learn from previous experiences and adapt with new techniques – political ‘memes’ remain of crucial importance. The proof is that many of those created during the 2016 elections are still shared today by thousands of Americans who ignore their provenance when they are not directly reused by Russia itself: according to Facebook, the IRA campaign suppressed this week by this Social network had rescued many of the old themes and images already used in these previous years. Apparently, there are Russian memes for a while.