More
HomeViolence continues in Gaza as immediate truce moves away

Violence continues in Gaza as immediate truce moves away 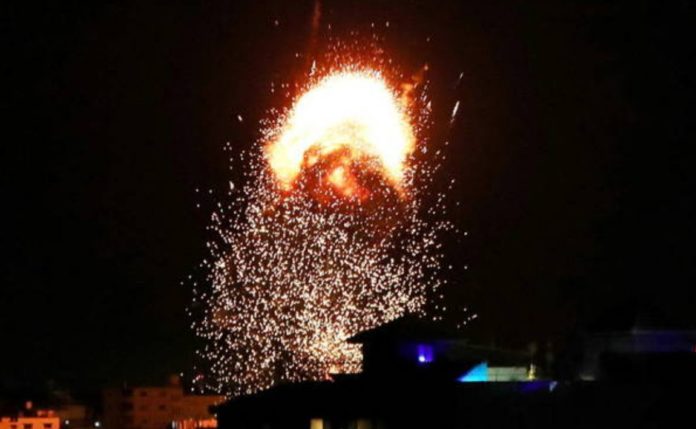 Israel and the Gaza militias have entered the second week of military escalation, with 212 dead on the Palestinian side and 10 on the Israeli side, with no diplomatic efforts paid off.

The escalation of violence in the Gaza Strip continues. Israel and the Gaza militias have entered the second week of military escalation, with 212 dead on the Palestinian side and 10 on the Israeli side, without the diplomatic efforts for a truce having borne fruit. The Israeli Defense Force (IDF) announced on Twitter on Monday that they had reached “the main center of operations of Hamas’s internal security force in Gaza.” In addition, the only laboratory in the area that carried out tests for the coronavirus has been damaged by an Israeli bombing and has had to completely cease its activity, according to the Ministry of Health of the Gaza Strip.

The target of the Israeli attacks would be the Faisal al Shawa building, located across the street from the laboratory, which is why it was hit by projectiles from an Israeli bombardment, said the Minister of Health of the Hamas Government in Gaza, Yusuf Abu Rish, quoted by the Israeli press. The Israeli army has not commented on this at the moment.

Only one percent of the population of Gaza is vaccinated against the coronavirus, a figure that, added to the high incidence rates of the virus and the crowding of civilians in shelters during the bombings, makes the authorities fear an outbreak of infections.

Meanwhile, Israeli Prime Minister Benjamin Netanyahu has reported that he has ordered the Israeli Army to continue the offensive against the Palestinian militias in Gaza. “I have approved the operational plans (…). The order is to continue hitting terrorist targets. The Army is doing well,” he explained, while highlighting the “elimination of another high command of Islamic Jihad”, the attack on a “Hamas naval unit” and new attacks on the Hamas tunnel network.

For his part, the President of the United States, Joe Biden, expressed his support for a ceasefire to stop the escalation of the war between Israel and the Palestinians during a call on Monday with Israeli Prime Minister Benjamin Netanyahu, the White House reported in a statement.

“The president expressed support for a ceasefire and spoke about the commitment of the United States, Egypt, and other allies to that end,” the White House said.

In this context, six rockets were launched this Monday from Lebanon towards Israeli territory, but the shots were unsuccessful and the projectiles fell on Lebanese territory, reported the Israeli Army, which responded with artillery fire at the places from where the launches took place.

“6 rockets were just fired from Lebanon toward northern Israel, all of which fell inside Lebanon”, specified a military spokesman, who assured that “in response, our artillery forces fired toward the sources of the launches”.

6 rockets were just fired from Lebanon toward northern Israel, all of which fell inside Lebanon.

In response, our artillery forces fired toward the sources of the launches.

The situation in Gaza has been aggravated by an even greater reduction in electricity supply, which is limited to between three and four hours due to the destruction of power lines in the shelling.

The Gaza Electricity Distribution Company has specifically explained that eight of the ten high voltage lines from Israel have been “seriously damaged” and has warned of the humanitarian consequences of this situation. In addition, Gaza’s only power plant could stop working due to a lack of diesel fuel after the closure of the Kerem Shalom border crossing.

The death of the director of internal medicine at Shifa Hospital, the most important in the Gaza Strip, Aiman Abu al Ugh, and Gazan psychiatrist Moen al Alul, has also been known on Monday. The World Health Organization (WHO) subsidiary in the Palestinian territories has expressed its “deep sadness” at the death of Abu al-Ugh and Alul.

In total, the WHO has reported that 222 Palestinians have been killed and 6,046 injured since the start of the Israeli bombings. In addition, it has counted 91 attacks against health targets, has denounced the destruction of roads, which prevents ambulance access and a “high risk of coronavirus by the displaced population and the damage caused.”

In the West Bank, at least 22 Palestinians have died, the last of them an 18-year-old man shot by the Israeli military near the Al Arub refugee camp, near Hebron, according to the Israeli press.

Meanwhile, the secretariat of the Organization of American States (OAS) has classified the Palestinian militia-party Hamas as a “terrorist organization”, which it has accused of using children as “human shields” in an alleged attempt to prevent the bombings by Israeli forces over the Gaza Strip.