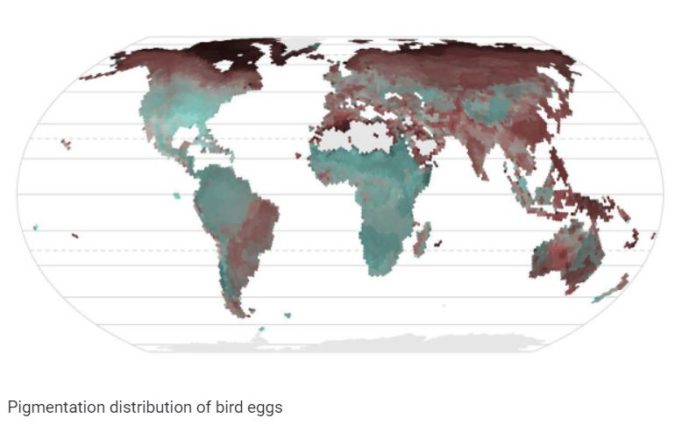 The colour of eggs of species of birds living in cold climates is determined by thermoregulation, according to a new study. In a cold and cloudy climate, birds lay darker eggs, and in the southern latitudes, pigmentation, apparently, already depends on several factors – the colour and brightness of eggs in the inhabitants of the tropics and subtropics changes much more often.

Bird eggs come in different colours, plain or covered with spots and dots. The white colour is determined by calcium carbonate, the biliverdin pigment gives them different shades of green-blue, and protoporphyrins are responsible for brown or reddish colour. But what determines the colour of the eggs is still not completely clear, although ornithologists have speculations about this. On the one hand, pigmentation can play a role in thermoregulation. Dark-coloured eggs absorb more of the solar energy that accidentally enters the nest, and they are more likely to overheat. Therefore, it is likely that dark-coloured eggs should be more likely to occur in northern latitudes, where there is less sun.

On the other hand, dark pigmentation of eggs, on the contrary, can be more often found in the southern latitudes, because dark eggs are less likely to attract the attention of predators. As shown earlier, predators more often break nests in warm rather than cold climates, so it can be assumed that dark-coloured eggs often carry tropical bird species. This hypothesis is also supported by the fact that protoporphyrins have antimicrobial properties that are activated by sunlight. It is also known that pigments that give eggs colour, especially biliverdin, protect them from harmful ultraviolet radiation. Therefore, if the color of the eggs has become part of the adaptation to ultraviolet, then in the southern latitudes, green-blue eggs should be more common.

To test all these hypotheses, American and Australian ornithologists, led by David Hanley of Long Island University, analyzed the color of 6.7 thousand eggs of 634 bird species, representing 36 of the 40 existing orders. Scientists mapped the range of bird nesting and watched how it relates to the colour and brightness of the color of eggs. In addition, they paid attention to the type of nest and identified three of their types – open nests on the ground, nests in the shape of a bowl, and located in hollows or indentations. By type of nest, they tracked how much sunlight reaches the eggs.

As a result of the analysis, scientists came to the conclusion that the main role colour plays in thermoregulation – at least when it comes to cold climate. Eggs of a darker colour were found in regions with a rather colder climate and less sunlight (p <0.0001).

At the same time, in the tropics and subtropics, several factors may influence the color. So, contrary to the assumption of scientists, in areas with a high level of ultraviolet radiation, birds carried light-coloured eggs, and dark green-blue ones were found in temperate latitudes, where the level of ultraviolet radiation was lower. Humidity also affected pigmentation: in an arid climate, the color of the shell was darker. Interestingly, color and brightness varied most in hot climates.

As predicted by the research team, egg pigmentation also correlated with the shape of the nest (p <0.0001). Species that made open nests on the ground laid darker and browner eggs than birds that made nests in hollows or crevices, and those that made nests in the form of a bowl. In species that lived in cooler climates and made cup-shaped and terrestrial nests, the eggs were darker.

The research team concluded that, apparently, the colour of the eggs plays an important role in thermoregulation in cold climates. At the same time, since the color and brightness of the eggs change more strongly in the southern latitudes, pigmentation in a warm climate may depend on several factors.

A few years ago, scientists showed a relationship between the shape of bird eggs and the fitness of birds for flight. In good flyers, the eggs turned out to be asymmetrical, in bad – round or in shape resembling an ellipse.

NASA’s new mission is to put a 50 cm infrared telescope...

A bright object in the working memory expanded the pupils