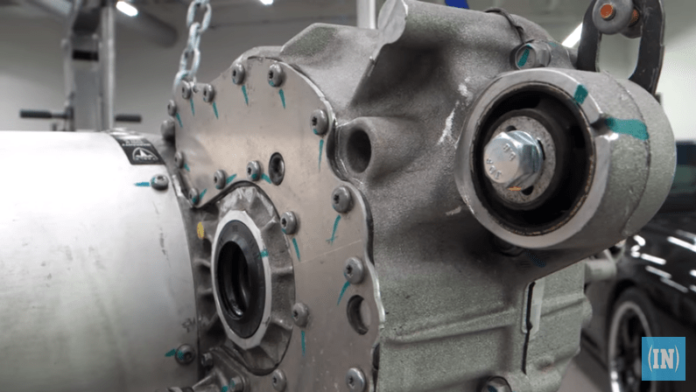 Today on YouTube we can find all kinds of videos related to Tesla, but we had never seen one in which they opened one of its engines. And it is that precisely one of Tesla’s best kept secrets is its electric motor and configuration, which in the end make it possible for the electric car to have that acceleration, autonomy and other unique benefits.

The feat was achieved on the channel ‘What’s Inside?’, where they managed to acquire an electric motor of a 2012 Tesla Model S on eBay. The video itself is impressive, since it not only shows us a configuration and placement of components in a very careful way, but also because of the spectacular way of opening it and discovering everything at once.

The magic of Tesla encapsulated in a 250 kilogram cylinder

Thanks to this video we can see some of the differences between an electric motor and a combustion engine, where of course the size stands out, but the most impressive is the computer that is sealed inside this 250 kilogram metal cylinder.

When they begin to disassemble it, the first thing we see is a large amount of blue liquid that serves as a coolant, to later reach what is the most interesting part of the video: the computer and the engine electronics. Here we can see several plates placed in the shape of a triangle, where you can also see other components whose operation is unknown.

Once they arrive at the gearbox, we see the huge gears and bearings filled with oil, which is where the video unfortunately ends. Everything seems to indicate that there will be a second part where they will focus on this part of the motor to know their coils and magnets, as well as in trying to understand its operation.

One point that should be noted is that it is a seven-year-old engine , and when talking about Tesla this could mean that the design has surely evolved to be more efficient and perhaps smaller. But we won’t know that until someone decides to open an engine of a Model 3 or another recent Tesla model.

Tesla’s new patent gives us details of its ambitious battery which,...

Elon Musk shuffles the possibility to equip the Model 3 with...

The Germans dispersed an aerotax tiltrotor faster than 100 kilometers per...