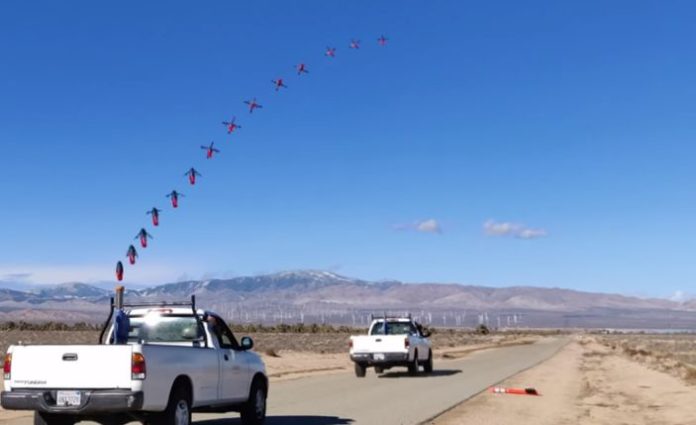 A team of engineers have developed a drone with folding shoulders, which can be fired from the launcher, and even on the go. After taking off from the launcher, the drone’s shoulders open, then the propellers begin to rotate, and less than a second after launch the drone moves into a stable controlled flight.

As a rule, drones are launched from the ground, but it requires a flat platform, and most importantly – time. If the drone needs to be launched quickly, this pattern is not appropriate. For example, the military has repeatedly suggested the use of drones for reconnaissance, complementing them with combat vehicles. However, for a combat vehicle, stopping can be dangerous, and running conventional quadcopters at speed is quite difficult because of the oncoming airflow.

To solve this, a team of engineers from the California Institute of Technology and NASA, led by Brett Kennedy, have created an almost instantaneous drone launch system that can be used even on Speed. When folded, the drone has a streamlined shape, similar to a mortar mine with a tail. The device is a quadcopter, but in folded form all four shoulders with screws on the ends fit tightly to the notches in the body and are restrained by a nylon thread.

During the launch, the drone activates heaters that melt the thread. Since the shoulders are connected to the body through loops with torsion springs, after 70 milliseconds they are completely straightened. Within 0.7 seconds of launch, the drone is already in a stable position and its propellers are untwisted to sufficient speed to continue the controlled flight. To start, the engineers have taken a ready-made solution in the form of an air gun for baseballs, which is usually used during training.

Engineers demonstrated several drone launches, one of which occurred not from the ground, but from a pickup truck. Despite the fact that the pickup truck was moving at a speed of 80 kilometres per hour, the drone successfully opened its shoulders, stabilized its position and continued to fly under the control of the operator.

The current prototype has several flaws that engineers can fix in future versions. In particular, the application of the molten nylon filament means that the drone cannot be folded and launched again. In addition, when landing, it falls to one side because of the elongated body and the lack of legs. Finally, it cannot use GPS from the beginning of the flight because of the metal pipe in the air gun.

The U.S. military has already used a pneumatic drone launch, but they have used this method to launch an aircraft-type drone that is easier to adapt for such a task.

When starting with the car there is another problem – after the flight, the drone must be put back on the car.

They “were surprised to find evidence of two or three companion stars that probably...
Scientific Research

Researchers at the Department of Energy's SLAC National Accelerator Laboratory and Stanford University have...

They “were surprised to find evidence of two or three companion stars that probably...
Revyuh