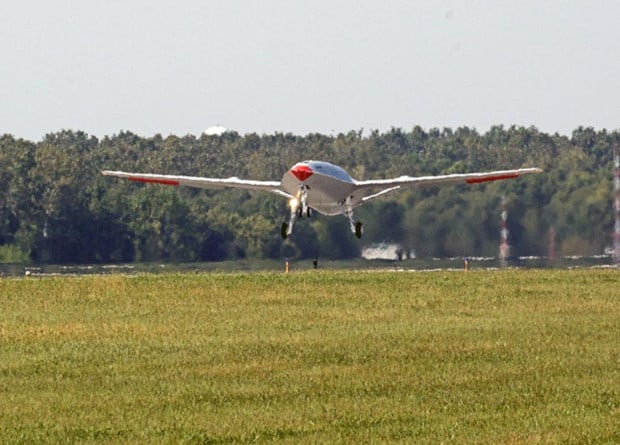 A promising American deck-based unmanned aerial vehicle – the MQ-25 Stingray refueling tank, developed by the Boeing aircraft manufacturing concern, made its first flight on September 19, 2019. According to the concern, an experimental model of the device under the designation T1 took off. Tests of flight models created as part of experimental design work will begin later.

Boeing has won the tender for the development of the deck-based drone MQ-25A in 2018. The company received a U.S. Navy contract to develop, manufacture and test four drones. After the successful completion of this stage, the concern may receive a contract for the production of another 68 units. The total cost of the MQ-25 project is estimated at 13 billion dollars.

MQ-25 is made according to the classical aircraft scheme with a trapezoidal fuselage in cross section and a normal sweep wing. The keels of the device have large angles of inclination, so that in flight they also play the role of horizontal stabilizers. The engine nozzle is flat to reduce the visibility of the drone in the radar and infrared spectra.

The first flight MQ-25 was developed and assembled by Boeing in preparation for the US Navy tender. Boeing received permission from the US Federal Aviation Administration for flight tests of the T1 drone in early September of this year.

The first drone took place at the St. Louis airport in Illinois. The device in fully autonomous mode performed takeoff, flight along a given route and landing. According to Defense News, the total duration of the flight of the MQ-25 was two hours. Experts checked the operation of data exchange systems with a drone, its stability and controllability.

It was previously reported that flight tests of the MQ-25 will be carried out for a year and a half. Such checks will provide complete information on the operation of all UAV systems, including the refueling, as well as refine them. Then the concern will begin advanced testing of four prototypes of the MQ-25. The U.S. Navy plans to adopt a new drone in service in 2024.

At the end of July this year, the Army and the U.S. Navy began testing a promising reconnaissance drone V-Bat, which is being developed by MartinUAV. The device, made according to the Tailsitter scheme, is planned to be used from almost any class of ships and unprepared take-off sites.