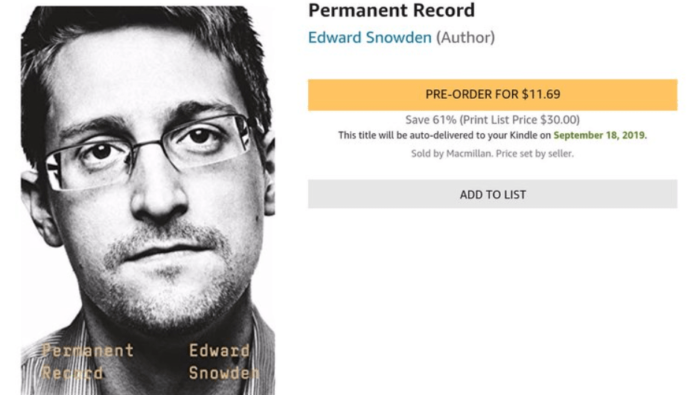 The US government claims all US whistleblower Edward Snowden‘s revenue from his autobiography. This is clear from an application filed by the US government in a Virginia District Court on September 17, 2019. In addition, the court is to establish that Snowden has broken its contractual obligations with the US intelligence services CIA and NSA.

Snowden’s book Permanent Record has been published in the Georg von Holtzbrink publishing group, which includes the US publisher Macmillian and the German Fischer publishing house. The lawsuit is also directed against the US publisher and Holtzbrinck Publishers as so-called relief defendants.

The US authorities accuse Snowden in the 26-page complaint ( PDF ) of violating confidentiality and secrecy obligations he signed before joining the intelligence services. For that reason, he should have submitted the book to the CIA and the NSA for publication before publication.

The US government refers to the case of CIA employee and whistleblower Frank Snepp, who had written a book about his work as a CIA agent in the Vietnam War. The US Supreme Court ruled in 1980 that the CIA’s book revenue was held.

According to the lawsuit, Snowden signed agreements of confidentiality with the CIA in 2005, 2006 and 2009. In it, he also transferred to the US government all income and royalties from publications resulting from the breach of the statement or contained secret material. As an NSA employee, he also signed agreements in 2005, 2009 and 2013. The latest contract is therefore dated March 27, 2013. By that time, Snowden had already contacted journalists Glenn Greenwald and Laura Poitras to send them the NSA documents.

Book sales should not be restricted

The US government wants to first block by interim injunction all revenue to be transferred via the US publishers to Snowden and his literary agents. By permanent disposal, the publisher should be required to transfer all book receipts, which are due Snowden, to the US government.

The US government does not want to stop or limit the distribution of the book with the lawsuit, said the Ministry of Justice. It simply wanted to make sure that “Edward Snowden has no material benefits from his smuggling,” said prosecutor G. Zachary Terwilliger. Whether the US government plans to sue in other countries also the Snowden fees, is not clear from the press release.

Snowden himself tweeted to the announcement only: “Hours after the US government has filed a lawsuit to punish the publication of my memoir Permanent Record, is the book from which the government does not want you to read it, the world’s become the most sold book.”

Hours after the United States government filed a lawsuit seeking to punish the publication of my new memoir, #PermanentRecord, the very book the government does not want you to read just became the #1 best-selling book in the world. It is available wherever fine books are sold.

Rovio agrees with Altai retailer over the dispute on Angry Birds...