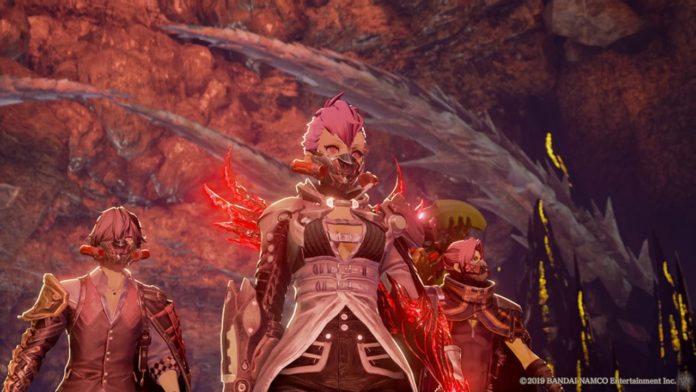 The anime world meets Dark Souls. This is the easiest way to define what Code Vein is. Of course, this is quite a simplification, but it’s hard not to notice all these inspirations regarding the production of From Software. It would also be unfair to define this game with a rude clone with the appropriate graphic overlay. This is an interesting combination of well-known mechanics, but also quite new. The developer managed to catch the attention of the recipient, and this is not so simple.

A post-apocalyptic world full of blood

The player takes on the silent character, which he creates from scratch. When she wakes up, it turns out that the place where she is found has been affected by a mysterious cataclysm. Everyone around is blood-thirsty Revenants, without which they can’t function. If the hunger lasts too long, the “person” will lose his humanity and turn into a monstrous creature called Lost. Nobody wants him to meet such a fate. In this way we have a situation where everyone is fighting for the smallest amount of “raw material” to live. Our character, like many others, is in a sense something of a vampire. The difference is that it does not turn into a bat, does not drain blood from the neck, and the sun is not afraid of it. Fortunately, this vital ingredient that is so desirable can be obtained in a different way.

There are certain types of trees that Blood Beads grow on. Thanks to them, Revenants are able to satisfy their hunger. The problem is, however, that there are fewer and fewer plants in need. However, it turns out that the character we created has the power through which he is able to revive the said vegetation, thus creating a source for the “needy”. Of course, no one knows why this person has the ability and who he is. Everyone after death, when he wakes up as a Revenant loses most of his memories, including the protagonist. However, this does not mean that the memory cannot be restored. At this point, you should already guess what the main theme of Code Vein is focusing on. We have presented you with only a rudimentary outline, but it is really worth learning the whole story. Even if it is presented in a specific form.

We learn the plot of the game in several ways. Through exploration, conversations with characters, movie cut scenes and blood echoes. The latter are special locations, happening as if in a dream, where we discover the past of specific people and at the same time learn more about the world and various events. These stages are conducted at a fairly slow pace, and the controlled character moves even sluggishly. The idea itself is interesting, but it would be better if it could not be moved at all, or somehow speed it up. However, this does not change the fact that presenting the plot in this way is interesting. In general, all the stories we learn are engaging, thanks to which the recipient with interest discovers the next pieces of the puzzle.

It is a pity, however, that it is hard to worry about what the characters often say. Discovering blood echoes is much better than any conversation with NPCs. We did not feel that seriousness at all, those emotions that the people in the game tried to convey. Maybe current games have accustomed us to good, but in 2019 We require a little more than such plasticity. When conducting conversations We felt like We were playing MMO from a decade ago, and that’s not how it should look. Even by limiting the media, you can perfectly present everything, as evidenced by Dark Souls or Bloodborne. Unfortunately, it didn’t work here. If the usual locations do not satisfy someone, there are additional places where further challenges await. Such dungeons whose levels you must unlock. A nice addition that extends the fun.

Code Vein and elements from other games

You are probably interested in how the main element of the game falls, i.e. the fight. It is worth mentioning here that the developer has released a demo, thanks to which you will quickly learn the basics and the duel system itself. You can feel the souls like spirit here, because we mark the opponent we want to attack and make specific moves. Light and heavy attacks, we defend, parry, use power and special abilities. At first, we have little opportunity, due to the number of Blood Codes that are responsible for different fighting styles. Revenants are unable to use them or even approach them. Only our character is able to use their potential. Each such “code” is a different set of passive and active skills that must be unlocked and then reach the master level.

However, Blood Codes must first be obtained, found, or received. Some of them will fall into our hands after completing the task, others are somewhere well hidden on the map, and others will be obtained by defeating the boss. We need currency to unlock abilities, increase character levels and purchases. Haze, because that’s how they define it here, we collect mainly from fallen opponents, but also from items. Sounds familiar? We can spend experience on special plants, which also serve as a checkpoint, allow us to move to different places, as well as to our “base”. This is nothing but a hideout where our allies are always located. Here you can prepare yourself before the fight, choose a partner, shop or improve your equipment.

Code Vein’s big advantage is the classes in the form of Blood Codes. Each of them affects some statistics, offers different abilities and is suitable in specific situations. The more we have, the more interesting build we can create. To fully master some power, you need items to get. Part of the skill is not rigidly assigned to only one BC, thanks to which we have a greater choice and we are not limited to using one. You can really combine a lot to get your character equipped with the right set of attacks or spells. This will be useful in clashes with bosses. Although here you can also take shortcuts. The game forgives a lot, so you don’t have to look for the right techniques to beat your stronger rival. All you need to do is spend some time leveling and upgrading your equipment to strengthen yourself accordingly.

This method will also work, although you always have to consider the risk of failure. Sometimes the enemy will start using attacks where dodging alone is not enough. After all, clashes do not require such precision and skills as in the case of the production of From Software. For some it will be a disadvantage for others. You should also mention character development. While subsequent levels increase certain parameters, only some items, weapons and the rest of the gear will affect some. You cannot manually change the values ​​of specific statistics. The developer clearly indicates having fun with Blood Codes when it comes to build, which we think is an interesting solution that works if you want to use it. Because you don’t have to.

Strong climate, but only good performance

From the visual side, Code Vein looks decent, but does not set any boundaries. Like the demo showed what to expect, and yet we were little disappointed. There is no shortage of low-quality textures, the animations are simply good, and the smoothness of the animation is not stable. The game can noticeably slow down at times when the console is most likely “building” another part of the terrain. Most often this can be felt in cramped places where nothing happens. Character models contrast with the world a little, because they are full of details and the whole environment is a bit simpler.

Some places are designed really well, others seem as if they lacked budget. As a result, the recipient feels this inconsistency in all this. The location, which seems to be a tribute to Dark Souls, turned out to be a nice touch. Everyone who associates Anor Londo will quickly understand what this is about. This is one of the most interesting places in Code Vein, where checking everything takes a lot of time. However, we recommend looking around a bit, it’s really worth it. The soundtrack came out similar. Music nicely fits into the atmosphere of this production. However, there are no pieces that we will miss and which arouse the right emotions for the recipient. This element was made correctly, but without major revelations. It fulfills its task and that’s all.

Who is Code Vein for?

This is a very good question. In theory, every souls like fan will fit here, but in practice some things can bother you. The fights are pleasant and using the potential of Blood Codes make a lot of fun. However, if grinding forgives errors and allows you to get through the game by force, something probably went wrong. The plot is interesting, although not always given in a good way. There are too many of these “buts” here and you have to consider them before you decide to buy. There is something to work on and We hope that we will see the continuation. The title has potential, but some things need to be improved. It’s generally a good soulslike, but if you lack experience at the moment, maybe it’s worth a try? However, if someone asks us if it is worth buying this production today, We would recommend stopping a bit.