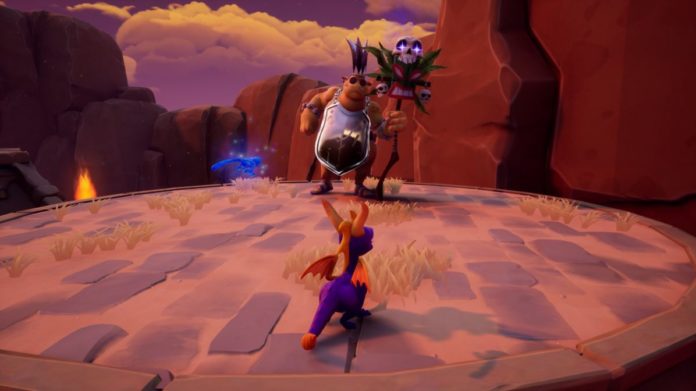 Spyro Reignited Trilogy is a remaster of three games that were released in the late 90s on the original PlayStation. Last year, Activision released an updated classic on consoles, and in this it came to the PC. Pay attention to the release is for everyone, not just fans of the classics. Today, gloomy and bloodthirsty militants rule the market. And big-budget 3D platformers are rare. Therefore, the Spyro trilogy will be a real gift for lovers of bright fairytale adventures.

The winged hero travels through magical worlds, chatting with funny creatures, defeating monsters with the help of horns and fiery breathing, collecting crystals, jumping a lot and hovering in the air. It would seem that the set is meager. But not boring – thanks to the variety of scenery and enemies, as well as mini-games.

Here, each level has its own mood and thematic design. At one point, Spyro runs through the desert, reminiscent of Mexico, and incinerates barbel in sombrero. In another, it helps shamans in a snowy location to figure out the yeti. In the third – he hurries to the rescue of forest caterpillars that fight with birds. Fun? Quite!

And fabulously beautiful – like an interactive Hollywood cartoon from Pixar or DreamWorks. The winged hero hilariously ridiculously grimaces, attacking goblins, and those make faces in response to him and threaten with fists. Butterflies flutter in the thick grass, the leaves of the trees dance in the wind, the expanse of the river shimmers with sunbeams. The Kingdom of Dragons really feels alive like never before. True, the coin has a downside: for some, the picture may seem too plastic or even caricatured.

Flaws in Spyro’s adventures are inherited from the original source of twenty years ago: not all screensavers, minigames are familiar today, and levels are sometimes rustic. Most questions to the first part – it is too outdated. Against this background, the remaining issues look much more interesting. Say in Spyro 2: Ripto’s Rage! The little dragon teaches abilities like climbing stairs and diving. The third part pleases with additional heroes that change the pace of the gameplay. For example, a kangaroo jumps high, reaching Spyro’s inaccessible places, and tramples enemies. And the space monkey shoots enemies from the blaster. But even a fascinating shot can not hide the shortcomings of the plot.

The story of any issue comes down to the fact that the character either saves someone, or is looking for some objects. For example, in the first part, dragons must be freed, turned by the sorcerer into blocks of ice. In the sequel, collect talismans to defeat another mage who seized power in the Kingdom.

This implies the next minus the trilogy – the emphasis on collecting all sorts of stuff. Find 500 crystals to get into the locked castle. Save 20 dragons, without which the road to the battle with the boss will not open. And so on. Who is not used to combing the levels from and to right away, he will often return to the completed locations.

Puzzling and unbalanced complexity. Most of the time, playing is too easy: neither enemies nor acrobatics create real problems. But mini-games and bonus stages with flights, where you have to maneuver between obstacles, rarely forgive mistakes. There is no middle ground here.

However, the authors of the reprint can also be understood: they just did a literal remaster. And he plays on the feelings of gaming nostalgia perfectly. The trilogy gives a feeling of long-forgotten delight – that youthful joy when you discover a secret level or defeat another formidable boss.

Pros: A luxurious picture in the best traditions of Pixar cartoons, the opportunity to relive the beloved adventures of childhood and youth, a remastered soundtrack, convenient control on the keyboard and mouse, the game is suitable for both children and adults.

Cons: A rustic plot, low complexity, individual elements of the trilogy are outdated.