More
HomeLifestyleSocial NetworksWoman on AA Flight duct-taped to her seat after she tried to... 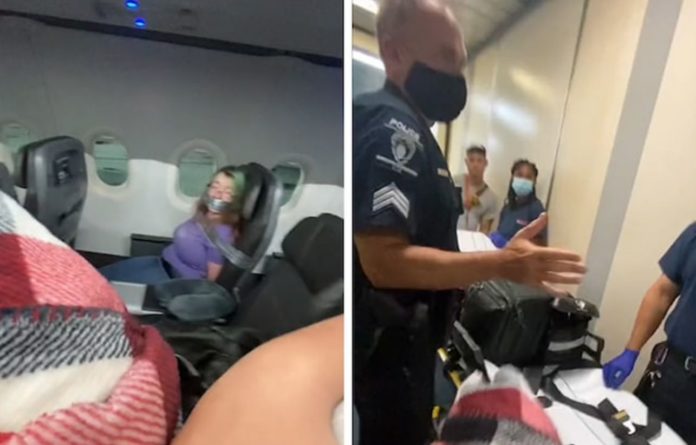 The incident happened on American Airlines Flight 1774 that was travelling from Dallas-Fort Worth, Texas to Charlotte, North Carolina.

The video shared by by TikTok user @lol.ariee on social media showed the grey-haired woman with duck tape on her mouth, and her arms and body taped to her seat.

The two-hour flight from Dallas-Fort Worth to Charlotte, NC, had been delayed for at least three hours before it finally departed at midnight, but about an hour into the trip, chaos broke out, @lol.ariee said in subsequent videos describing the hectic scene.

Flight attendants began turning on the lights at around 1:30 a.m., she said, “and we see all flight attendants running up and down the aisles, frantically kind of like whispering to each other.”

“It was just kind of like chaos and no one knows what’s going on,” she continued.

Finally the pilot spoke over the intercom, asking people to stay in their seats, and referencing “a bad situation in the plane right now,” according to the passenger.

“Then we’re gradually starting to hear more and more screaming, and we’re like, ‘Wait a minute,’” she noted.

Just as the plane was about to land, a flight attendant who sat near them explained a woman with an apparent mental issue, “had an outburst and like, had the urge to get off the plane. And she was saying, ‘I need to get off this plane,’ and she went up to the exits and started banging on the doors, saying, ‘You need to let me off this plane!’”

“I guess it took all five flight attendants to subdue her and like literally take her down so,” she said, of the incident, which was first reported by TMZ.

“They pretty much took her down, put her in the seat and duct taped her.”

American Airlines confirmed the incident, telling The Post the woman assaulted and bit a flight attendant after she “attempted to open the forward boarding door” and was restrained “for the safety and security of other customers and our crew.”

Emergency personnel met the flight on the ground in Charlotte, and took the woman to a local hospital, said the airline, who placed her on American’s “internal” no fly list pending an investigations.