Elon Musk introduced a prototype of the reusable Starship spaceship 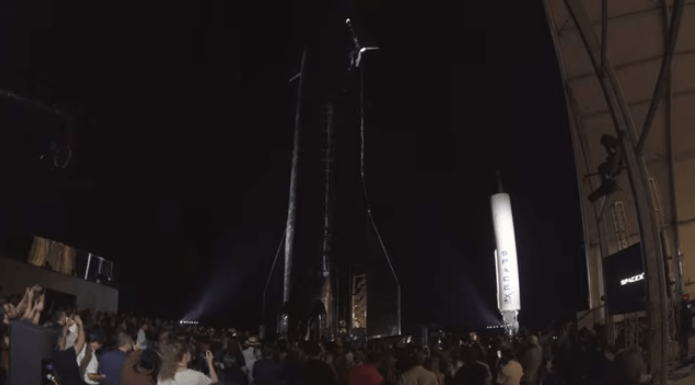 Elon Musk boasted a new development. The launch pad in Texas hosted the presentation of the reusable Starship spaceship, which can transport people and cargo to the moon or Mars.

Musk says that Starship will be able to transport up to 100 people and will become the main transport for the colonization of the Moon, Mars and even “further”, as the entrepreneur himself says.

What kind of ship

SpaceX has already called its ship “the most powerful rocket in history.”

The rocket has two stages – the Super Heavy accelerator and the part that includes Starship itself. The mass of the ship was 120, and the length was 50 meters.

According to Mask, Super Heavy will be powered by 37 Raptor engines and will develop traction twice as large as the largest Saturn V rocket developed by NASA.

Particular attention during the presentation was paid to the unusual design of Starship itself. The ship is made of stainless steel, which is covered on the outside with a thin layer of refractory ceramics. This layer is transparent. Therefore, the rocket looks very unusual from the outside – it literally glistens in the sun.

Musk admitted that he was crazy about steel.

“Everyone thinks steel is heavy,” Musk said. “But in fact, steel structures are the lightest.”

The refractory layer of ceramics is needed in order to withstand the colossal thermal overloads that occur when a ship returns to Earth and passes through the atmosphere.

Musk also shared plans for the Starship orbital reload. The company is developing a technology that will allow ships to refuel each other in orbit. This will prevent Starship from docking for refueling with the International Space Station or any other orbital structure of this type in the future.

“This is another element of the future scheme of colonization of the Moon or Mars,” said Musk.

SpaceX builds Starship with two teams that compete with each other, writes Bloomberg. In addition to the already assembled first model of the ship, another team is already building the second option.

Musk announced that Starship will fly for the first time in 1-2 months: the ship will rise about 20 kilometers and after a while will land back. “It sounds like crazy, but I think we’ll try to enter orbit in less than six months,” the head of SpaceX added, stipulating that these dates depend on the success of ongoing work on the rocket.

The third and fourth test instances of Starship can be launched in December-January. Perhaps the fourth version will be the first on which orbital flight will be tested.

Before sending people into space, SpaceX intends to conduct many tests to make sure that Starship can fly 3-4 times a day, and the launch vehicle can carry out at least 20 flights.

“What kind of future do you want?” Musk asked the audience, offering to choose from two options: to remain a terrestrial biological species or to become cosmic individuals.

He expressed the hope that humanity will choose the second. Sooner or later, the cost of space travel for passengers should come close to the price of air travel, he once again promised.

According to Musk, SpaceX also does not mind having a base on the moon, at least for research purposes. He also plans that in the future, SpaceX will be able to produce fuel on Earth using renewable energy.

Experts express a certain skepticism regarding the Napoleonic plans of the Mask. Previously, SpaceX constantly disrupted the promised launch dates for rockets and other tests.

It is also worth remembering that Musk, assuring that the first humans will fly to Mars as early as 2024, has not yet put a single person into orbit.