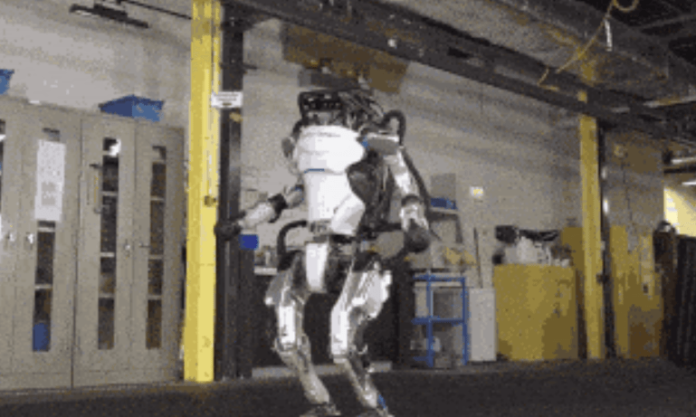 The company Boston Dynamics has shown new possibilities Atlas humanoid robot. He learned to tumble forward, as well as bounce and rotate the hull around its axis 360 degrees in flight. In addition, the company announced the sale of four-legged robot Spot.

Announcing the launch of Spot! Spot is available to select early customers starting today. Find out more about using Spot in your application by visiting us at https://t.co/b0z8fszkNnhttps://t.co/nsWoGwIXER

Boston Dynamics introduced the new version of the Atlas humanoid robot in 2016 and has since been teaching it new movements that could potentially come in handy when working in difficult conditions. For example, a robot already knows how to do parkour, quickly jumping onto tall blocks, running, lifting its legs off the ground, and also doing back flips.

In a new video, engineers showed that Atlas is now able to do several new tricks in a row. At first, the robot fell on his hands and soon after that he got upside down on them. Without stopping, he made two somersaults forward. Immediately after that, he got up, jumped up and turned 180 degrees in a jump. Then the robot made another somersault, jumped up, spreading its legs, landed and made the last somersault. At the end of the video, Atlas from a standing position turned 360 degrees in a jump and raised his hands up, like gymnasts.

These tricks are complex in their own right, but engineers note that the key to them is how they were created. Engineers finalized the robot control algorithms, so that now they can set high-level movements, and the robot independently calculates for them the corresponding movements of all motors. In addition, algorithms now allow the robot to perform complex maneuvers without a pause between them. The developers note that these changes made it possible to prepare new tricks much faster than for previous demonstrations with somersaults and parkour, despite the fact that the robot makes more various movements in the new video.

In addition to updating the Atlas robot, Boston Dynamics also revealed that it has begun selling the production version of the four-legged Spot robot, formerly known as SpotMini. Now any company can order it, but the price of the robot is not known. In addition to the robot itself, engineers developed additional equipment for it, mounted on the back: a panoramic camera and a robotic arm.

Two other companies recently introduced similar four-legged robots designed for commercial use. The Chinese company Unitree Robotics was the first to show their development, and then the Swiss engineers showed the new version of the ANYmal robot . The second robot has noticeable differences in design and properties, for example, its body is protected from water according to IP67.