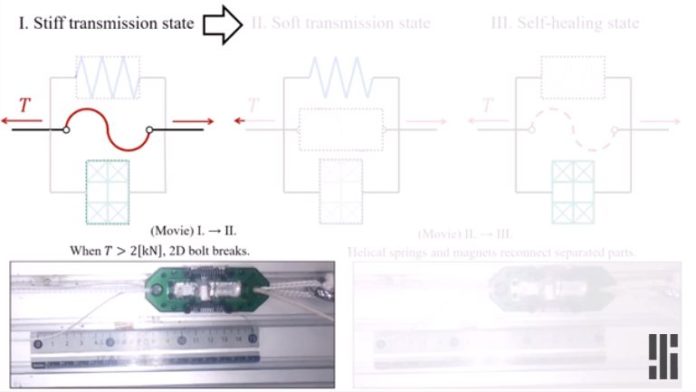 A team of Japanese engineers have created a robotic leg with a mechanical fuse that can recover after use. The metal alloy tape is responsible for the restoration in the element, which breaks at a certain load, then melts under the action of a heater and again forms a single part that can be reused, says IEEE Spectrum.

Since robots and other machines can be subjected to high loads during operation, sometimes critical for them, there are simple mechanical elements designed to protect against an excessive load. For example, to limit the load, mechanical fuses are used, breaking at a certain predetermined force, and jerk shock absorbers are used to mitigate the load with a sharp increase in load. As a rule, these elements are disposable and have to be replaced after use.

Masayuki Inaba with colleagues from the University of Tokyo developed and demonstrated a reusable mechanical fuse that can recover after a break. The design consists of a frame connected by springs and permanent magnets, as well as an alloy tape with a low melting point (about 50 degrees Celsius).

The fuse is connected to the lowest leg segment through the cable so that when the leg is bent, the cable stretches and the load on the fuse increases. The parameters of the fuse and the entire leg as a whole are designed so that the metal strip in it breaks first and thereby protects other elements from destruction.After the fuse blows and the tape in it breaks, the load drops and the two parts of the tape are again attracted to each other thanks to magnets and springs. After that, the heating element melts the metal and two fragments of the tape are connected. During recovery, the alloy does not flow out of the fuse due to the transparent “windows” on both sides.

The developers showed the operation of the fuse on the example of a robotic leg. When the leg falls, the fuse blows, but then restores. At the same time, the strength of the tape is reduced by more than three times, therefore, in the process of straightening the legs after restoration, the fuse broke again.