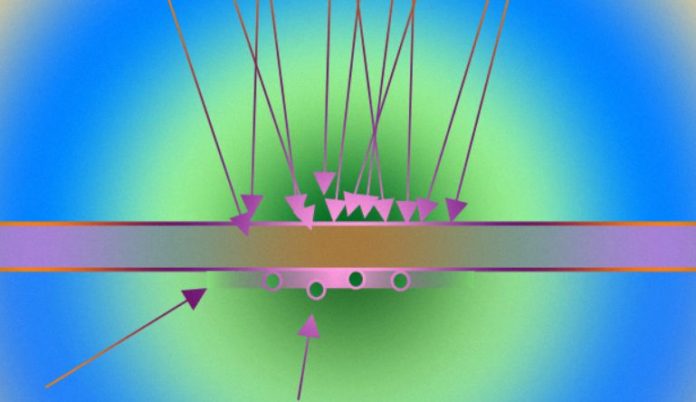 A physicist has published theoretical calculations, according to which using existing technologies it is possible to create high concentrations of positronium inside the bubbles in liquid helium. Obtaining such material will allow beginning experiments on forced annihilation, which will lead to the generation of coherent gamma radiation, that is, to represent gamma-ray laser.

A laser is a device that generates coherent electromagnetic waves. Such oscillations differ in the consistency of the amplitude and phase, which makes it possible to focus them in small areas, while they are able to propagate over long distances without significant beam broadening, and also have frequent from an exceptionally small band.

The conditions for the generation of coherent radiation differ significantly for different frequency ranges, which is why in the narrow sense lasers are called sources of only visible light or close wavelengths. In the case of the microwave region, they talk about masers, and high-energy radiation is created by X-ray lasers.

An unrealized idea so far remains a gamma laser, that is, the radiation of coherent photons of the highest energies. There are a number of theoretical concepts that mainly rely on a nuclear explosion or a pulsed nuclear reactor as an energy source (pumping). As a rule, most of these options in reality will be disposable, since the released energy destroys the entire installation.

The idea of ​​pumping in the form of the annihilation of electron-positron pairs is also proposed. To implement this idea, it is necessary to obtain a high frequency and dense localization of interactions. One of the options involves the creation of a large concentration of positroniums in helium-4 bubbles, that is, bound states from an electron and a positron. However, in practice, this has not been demonstrated.

One of the main difficulties lies in the need to obtain positronium with the same parameters so that controlled annihilation can be triggered. Ideally, it is necessary to obtain a Bose-Einstein condensate from these particles, which can be coherently “collapsed” by external action. At the moment, the experiments have demonstrated the existence of individual positroniums in bubbles of liquid helium, as well as single electrons, their groups and hydrogen atoms.

Allen Mills, a researcher at the University of California, Riverside, has cited new calculations, according to which the first experiments can be started in the near future. From his calculations, it follows that existing technologies make it possible to obtain bubbles with approximately 100 thousand positroniums in each, and experimental methods will be able to measure their momentum distribution, which will make it possible to verify the formation of quantum condensate.

The author suggests creating bubbles by irradiating a diamond plate with positron pulses. Most particles will be absorbed by the substance, but about 20 per cent forms positronium and enters liquid helium. In this case, the energy of the resulting particles will be in a suitable range from zero to three electron volts. Due to the negative affinity between helium and positronium, the latter immediately form small bubbles, which begin to merge, since the energy of large ones is less than that of a combination of small ones. Calculations show that a time of the order of a hundred nanoseconds should be sufficient for the formation of bubbles, and the thermal conductivity of liquid helium – to remove excess heat.

The physicist obtained an expression for the radius of the bubble depending on the amount of positronium contained in it and the external pressure. At a pressure of one atmosphere and with an amount of over 100 thousand particles, bubbles should be obtained with an almost constant concentration of 1.3 × 10 20 positroniums in a cubic centimetre, and the critical temperature for this substance will be about 370 kelvin, which will provide a high proportion of particles in the state condensate at low temperatures.

It will be possible to distinguish a situation with a relatively small number of bubbles with a large number of particles from a large number of small bubbles in the experiment by the lifetime. In the first case, it should be close to the value for vacuum (142 nanoseconds), and in the second it is determined by the interaction with helium atoms in the bubble wall (91 nanoseconds).

It will be possible to prove the presence of condensate using a magnetic field: if the inclusion of an external field for a short period of time (approximately 10 nanoseconds) leads to the emission of photons from annihilation strictly in opposite directions, then condensate was obtained. At the same time, a spread of angles with a characteristic value of 60 micro radians is expected for momentum distribution for the usual state at a temperature of 2 kelvin.

NASA will return to the Moon with Lockheed Martin