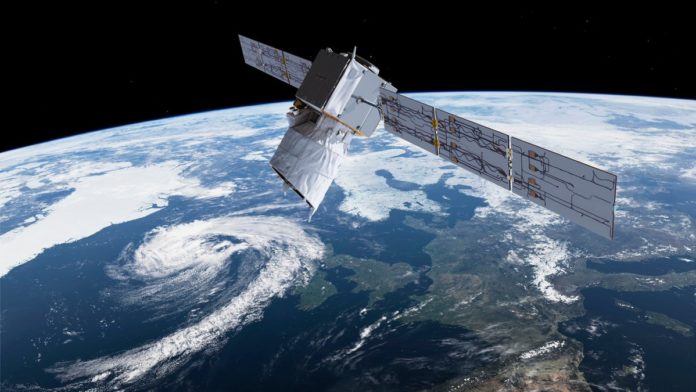 In space, more and more space junk is accumulating. Consequently, it is becoming increasingly common for a satellite to fly an evasive maneuver to avoid a possible collision with a disused satellite or wreckage. What’s new is what happened this week. On Monday, a European Space Agency (ESA) satellite had to dodge a satellite belonging to a satellite constellation for the first time.

As the ESA announced in a tweet, the Earth observation satellite Aeolus briefly ignited its propulsion jets as it threatened to collide with one of the 60 Starlink satellites recently launched by the US space company SpaceX on a near-Earth orbit. With the Starlink constellation SpaceX wants to bring broadband Internet in remote regions.

For the first time ever, ESA has performed a 'collision avoidance manoeuvre' to protect one of its satellites from colliding with a 'mega constellation'#SpaceTraffic pic.twitter.com/kmXvAgpj1U

The risk of a collision was almost 1 in 1000, says Holger Krag, who heads the Space Security Program at ESA. Thus, the threshold, which is recommended for safety reasons an evasive maneuver, has been exceeded almost ten times. In itself such maneuvers are nothing unusual. On average, each satellite must be raised to a higher orbit once a year. However, the maneuver was a novelty for the Aeolos satellite, which orbits the earth at an altitude of 320 kilometers and covers the air currents on Earth from space. Because at this altitude is usually not much going on. Most satellites circled around the earth at a greater distance.

The Starlink satellite should actually have been in a different orbit. Nominal runs its orbit at an altitude of 550 kilometers. For safety reasons, however, SpaceX had suspended the 60 satellites in May at a lower orbit. From there, they should control the intended orbit on their own. The Satellite, which has now caused problems, has not been promoted to a higher, but to a lower orbit. Why this happened is so far unclear. Such a measure is, for example, when a satellite is not working properly and you want to limit your time spent in space. The deeper a satellite flies, the more it is slowed down. The satellite then loses altitude and finally burns up in the earth’s atmosphere.

Krag does not want to dramatize the incident. However, what worries him is the fact that the 60 Starlink satellites should only be the vanguard of a much larger constellation. SpaceX has announced that it will be exposing more than 10 000 satellites in space over the next few years. In order to achieve the most complete coverage, orbits are provided at an altitude of 340 to 1300 kilometers. And other companies want to build a satellite-based Internet with large constellations. So far, nine licenses have been issued for such constellations.

That does not bode well – at least not for the traffic in space. According to the ESA, there are currently about 5,000 satellites in space (as of January 2019), of which nearly 2,000 are still operational. SpaceX and other private aerospace companies are expected to more than double that number. The consequence of this is that in the future it will come much more frequently to collision warnings, in which one must agree with another satellite operator, says Krag. You are not prepared for that.

Unlike aviation, there are no internationally binding traffic rules in space. Many things happen manually, says Krag. If a satellite operator registers a dangerous situation, he will speak with the operator of the other satellite to coordinate countermeasures. This often happens by phone or email. In the recent case, the ESA has informed about the planned evasive maneuvers to ensure that SpaceX does not react as well.

Krag considers this procedure to be untimely. What you need is a technical solution with automated communication protocols. In the future, it would then be negotiated automatically who reacts when and how. There are already proposals for an internationally binding “Space Trafic Management“, says Krag. At the ministerial conference in November, the ESA will propose a “Space Safety Program” to tackle this important topic.

Chinese radio telescope partially spread the antennas over the moon

A glass-shaped aluminum oxide, which can be stretched, compressed and bent...